The first time we hear “a wild goose chase” as a phrase in literature is in Shakespeare’s Romeo and Juliet.

A “wild goose chase” is a phrase that we all use – frequently – and we all know what it means – chasing after something that we will never catch, or pursuing some course that will lead nowhere. How many of us know why a useless pursuit should be termed a wild goose chase rather than some other activity, though?

The phrase as it is used today has come into modern common use via a somewhat chequered route. As originally used, including by Shakespeare, its meaning was completely different. It was not used to suggest a useless pursuit that’s doomed to failure, as it is today. Nor did it have anything to do with geese. Strangely enough, it was to do with horses.

In Act 2, scene 4 of Romeo and Juliet Mercutio, who is losing a battle of wits with Romeo, asks Benvolio to intervene; but Romeo says that he will declare himself the winner if Mercutio gives up. He rubs it in, saying, “Switch and spurs, switch and spurs, or I’ll cry a match.”

So there we have the phrase, but the meaning is not the same as it is in the modern sense of a wild goose chase being a useless endeavour.  Mercutio is using it in the sense that Romeo is riding in a kind of horse race popular in Elizabethan England. A “wild goose chase” was a race in which horses followed a lead horse at a set distance, that looked like wild geese flying in formation. Gervase Markham published an equestrian instructional manual: A Discourse of Horsmanshippe, in 1593, shortly before Shakespeare wrote Romeo and Juliet, in which he described the rules of the race. The main point was that the horses followed each other like geese in flight.

What Mercutio has in mind is the lead horse, as Romeo has assumed the lead in the wordplay. The way in which the race is conducted is that two horses having started at the starting point, race by the side of each other, till one having obtained the lead, is entitled to proceed in whatever direction the rider pleases, either by shortening or prolonging the distance to the winning spot previously agreed on, according to the conditions of his horse, or veering right or left. The other horses follow, spreading out on either side in the way geese do as they fly together. Mercutio is saying that he is giving up because Romeo, having got the better of him, is now taking the discussion wherever he wants to, which is what the lead horse does with the race.

We have to go forward in time from that usage in 1595, to see its meaning evolving from the horse race image to what it is today – a useless pursuit.

From the horse racing context and the random movement of the lead horse, the phrase came to be used figuratively in the sense of an erratic course taken by someone, especially in following their own impulses.

Shakespeare’s contemporaries, Thomas Middleton and William Rowley collaborated in a play, The Spanish Gipsie, (1623) in which “wild goose chase” is used in that sense:

Enter Diego.
– Diego: Ha, ha, ha! some one
That hath slept well to night, should a but see mee
Thus merry by my selfe, might justly think
I were not well in my wits.
– Lewys: Diego!
– Diego: Yes ’tis I, and I have had a fine vagary,
The rarest, Wild-goose chase.

From there the phrase went nowhere for a while and was almost lost – it was certainly not used to refer to a useless and pointless pursuit, and it wasn’t used as an idiom, but then, in 1755, it was defined for all time in much the way that we use it today:

In the first English dictionary, A Dictionary of the English Language, the lexicographer, Dr Samuel Johnson, defined “wild-goose chase” as a pursuit of something as unlikely to be caught as the wildgoose. He was paying tribute to the improbability of catching a wild goose. It was as simple as that, but it took off as the idiom that we know from there.

And that’s how we use “wild goose chase” every day in our conversations. 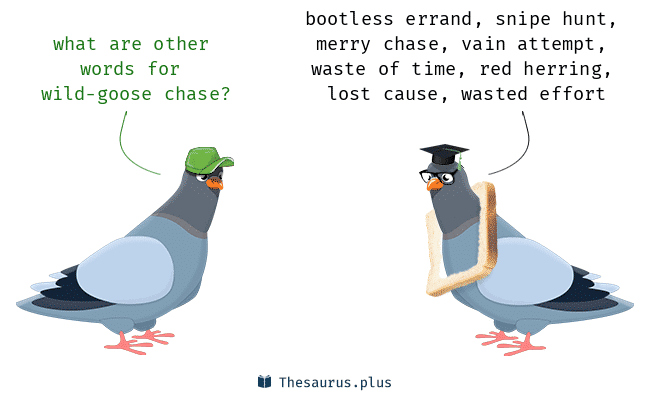