Looking for Richard II quotes? Read our selection of the very best quotes from Richard II, along with speaker, act and scene. One of Shakespeare’s history plays, Richard II is a cultured and charming man, but a failure as King. This presents some memorable dialogue and wonderful quotes as the play progresses – from both the King, and his subjects.

Read on below for the most well known and significant Richard II quotes:

Forget, forgive, conclude and be agreed:
Our doctors say this is no time to bleed.

We were not born to sue, but to command,
Which, since we cannot do, to make you friends,
Be ready, as your lives shall answer it.

Wrath-kindled gentlemen, be ruled by me.
Let’s purge this choler without letting blood.

Edward’s seven sons, whereof thyself art one,
Were as seven vials of his sacred blood

How long a time lies in one little word!
Four lagging winters and four wanton springs
End in a word; such is the breath of kings.

This royal throne of kings, this sceptred isle,
This earth of majesty, this seat of Mars.

This blessed plot, this earth, this realm, this England.

Landlord of England art thou and not king.

Come, lords, away.
To fight with Glendower and his complices;
A while to work and after holiday.

Not all the water in the rough rude sea
Can wash the balm from an anointed king.

For heaven’s sake let us sit upon the ground
And tell sad stories of the death of kings.

That power that made you king
Hath power to keep you king in spite of all.

I had forgot myself. Am I not king?
Awake, thou coward majesty, thou sleepest!

For within the hollow crown
That rounds the mortal temples of a king
Keeps Death his court.

Show us the hand of God
That hath dismissed us from our stewardship.

See, see, King Richard doth himself appear,
As doth the blushing discontented sun
From out the fiery portal of the east.

What must the king do now? Must he submit?
The King shall do it.

Great Duke of Lancaster, I come to thee
From plume-plucked Richard, who with willing soul
Adopts thee heir, and his high sceptre yields
To the possession of thy royal hand.

How soon my sorrow hath destroyed my face.

Doubly divorced? Bad men, ye violate
A twofold marriage, ‘twixt my crown and me
And then betwixt me and my married wife.

I wasted time, and now doth time waste me.

For now the devil that told me I did well
Says that this deed is chronicled in hell.
This dead king to the living king I’ll bear.
Take hence the rest, and give them burial here.

Though I did wish him dead,
I hate the murd’rer, love him murdered.

I’ll make a voyage to the Holy Land
To wash this blood off from my guilty hand.

Are we missing any great Richard II quotes? Let us know in the comments section below. 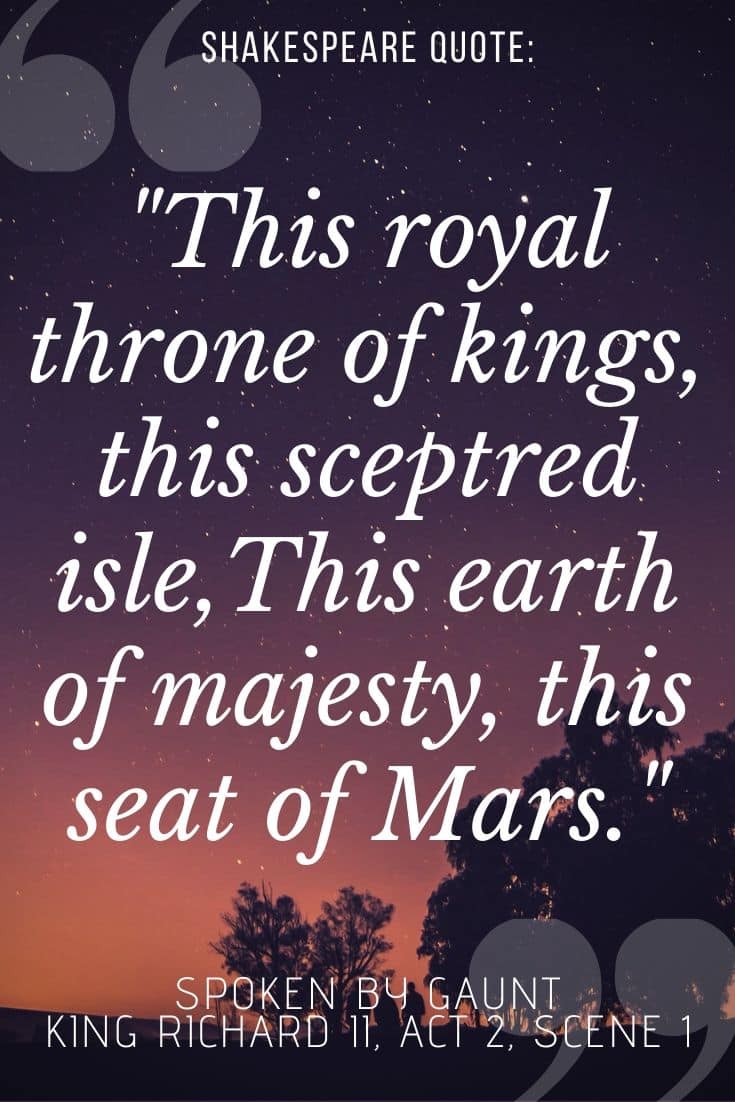