Read all the very best A Midsummer Night’s Dream quotes below. In A Midsummer Night’s Dream Shakespeare writes a play with many enduring quotes – particularly quotes around love and life. As with so many of his plays Shakespeare brings the characters to life with some fantastic quotes and more general dialogue, much in the form of love quotes such as the ubiquitous “The course of true love never did run smooth”.

Read our selection of the very best and most well known A Midsummer Night’s Dream quotes below, along with speaker, act and scene.

“Love looks not with the eyes, but with the mind,
And therefore is winged Cupid painted blind.”

“The course of true love never did run smooth.”

“I know a bank where the wild thyme blows,
Where oxlips and the nodding violet grows,
Quite over-canopied with luscious woodbine,
With sweet musk-roses and with eglantine.”

“I’ll follow thee and make a heaven of hell,
To die upon the hand I love so well.”

“Love’s stories written in love’s richest books.
To fan the moonbeams from his sleeping eyes.”

“And yet, to say the truth, reason and love keep little company together nowadays.”

“O, when she’s angry, she is keen and shrewd!
She was a vixen when she went to school;
And though she be but little, she is fierce.”

“Lord, what fools these mortals be!”

“Are you sure
That we are awake? It seems to me
That yet we sleep, we dream”

I have had a most rare vision. I had a dream, past the wit of man to say what dream it was… The eye of man hath not heard, the ear of man hath not seen, man’s hand is not able to taste, his tongue to conceive, nor his heart to report, what my dream was.

…not a mouse
Shall disturb this hallowed house.
I am sent with broom before,
To sweep the dust behind the door.

“Lovers and madmen have such seething brains,
Such shaping fantasies, that apprehend
More than cool reason ever comprehends.
The lunatic, the lover and the poet
Are of imagination all compact:
One sees more devils than vast hell can hold,
That is, the madman: the lover, all as frantic,
Sees Helen’s beauty in a brow of Egypt:
The poet’s eye, in fine frenzy rolling,
Doth glance from heaven to earth, from earth to heaven;
And as imagination bodies forth
The forms of things unknown, the poet’s pen
Turns them to shapes and gives to airy nothing
A local habitation and a name.”

“If we shadows have offended,
Think but this, and all is mended,
That you have but slumbered here
While these visions did appear.
And this weak and idle theme,
No more yielding but a dream,
Gentles, do not reprehend:
If you pardon, we will mend:
And, as I am an honest Puck,
If we have unearned luck
Now to ‘scape the serpent’s tongue,
We will make amends ere long;
Else the Puck a liar call;
So, good night unto you all.
Give me your hands, if we be friends,
And Robin shall restore amends.”

Are any of your favourite A Midsummer Night’s Dream quotes missing from the above list? Let us know in the comments below. 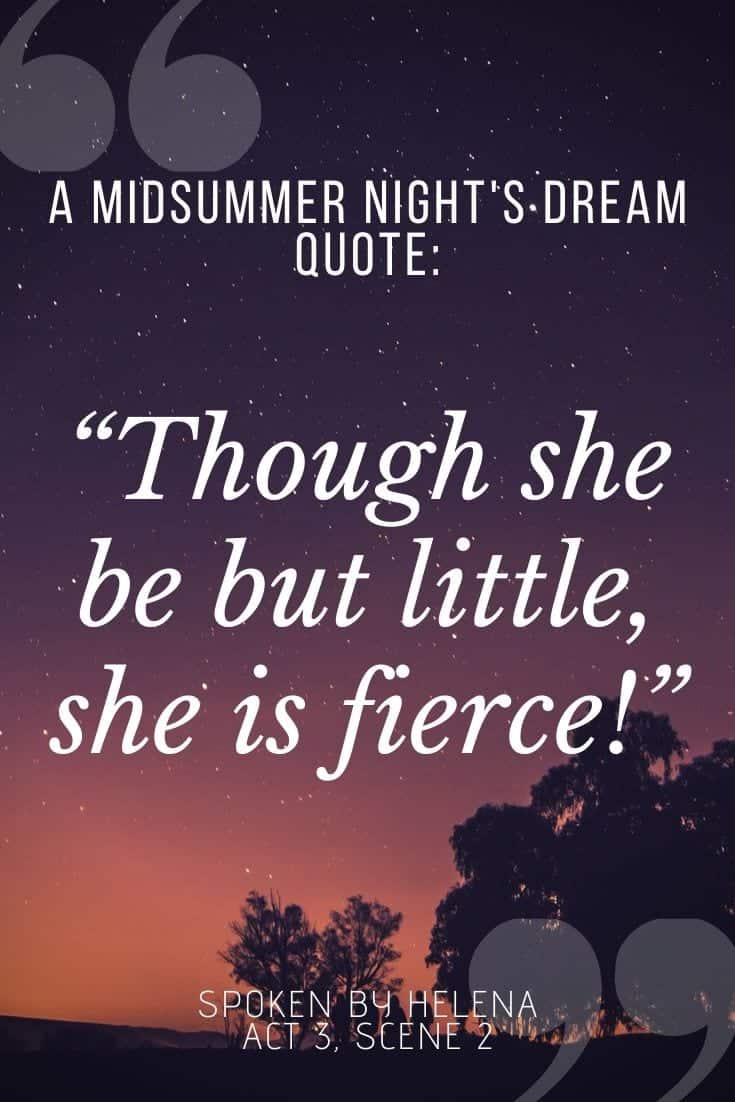 Full of vexation come I, with complaint (Spoken by Egeus, Act 1 Scene 1)

I am that merry wanderer of the night (Spoken by Puck, Act 2 Scene 1)

I know a bank where the wild thyme blows (Spoken by Oberon, Act 2 Scene 1)

My mistress with a monster is in love (Spoken by Portia, Act 4 Scene 1)