‘Hoisted By His Own Petard’, Meaning & Context

“Hoisted by his own petard” is a phrase that originates in Shakespeare’s play, Hamlet, spoken by Hamlet in Act 3, Scene 4.

Like so many phrases in Shakespeare’s works, it has become a common proverb – even though not many of the people who use the term ‘hoisted by his own petard’ actually knows what a petard is, or why being hoisted by it is relevant!

So. let’s break the phrase down to understand its true meaning:

In medieval times a petard was a bomb that invaders used to breach walls and blow doors in. To hoist suggests pulling something up, but the word used to also have another meaning, around removing or taking out. Thus the proverb means a person becoming the victim of a plot that person launches against someone else – in other words, the backfiring of something negative that one person has planned for another.

Bonus info – the word petard is a French word that has evolved from the latin pedere, which means to break wind. Shakespeare’s audience would have associated the phrase with the common use of the word peterade, which was a polite way of describing the breaking of wind instead of using the ultra-English word “fart.” More on how that joke worked below…

‘Hoisted by his own petard’ in context in Hamlet

Prince Hamlet is the subject of a number of assassination attempts by several characters, and has to tread a tightrope to avoid becoming a victim. The way it turns out, however, is that the plotting of the would-be assassins works against them so that they become victims of their own plots, metaphorically blowing themselves up.

Polonius hides behind a curtain in Gertrude’s bedroom to overhear the conversation between her and her son, Hamlet, so that she can take the evidence of what Hamlet is up to back to Claudius. Hamlet sees a movement of the curtain and jabs it with his sword, thereby killing Polonius.

Claudius has given Hamlet’s fellow students, Rosencrantz and Guildenstern, the mission of taking Hamlet to England with a letter to the English king instructing him to put Hamlet to death. However, Hamlet escapes from the ship, but he has replaced the letter with one instructing the English king to put Rosencrantz and Guildenstern to death, and they unwittingly sail on to their own death.

Later, at the end of the play, Laertes tries to kill Hamlet with a poisoned sword tip, but the swords are swapped during the duel and Laertes is killed by the poisoned tip.

After killing Polonius, Hamlet tells his mother of his plan to substitute the letter instructing the king to put the two students to death.

There’s letters sealed; and my two schoolfellows,
Whom I will trust as I will adders fanged,
They bear the mandate; they must sweep my way
And marshal me to knavery. Let it work,
For ’tis the sport to have the engineer
Hoist with his own petard; and ’t shall go hard
But I will delve one yard below their mines
And blow them at the moon. O, ’tis most sweet
When in one line two crafts directly meet.

The engineers Hamlet refers to in his speech are those who have been devising plots against him. Hamlet calls them engineers, the men who operated the various weapons, like catapults, battering rams, and bombs, in battles. And in this case, the ‘engineers’ are those responsible for executing plots to kill him.

It’s good fun, he is saying – sport – to have schemers destroyed by their own schemes. It is a literal backfiring, and not only that, there is the implication of these plotters being blown away by backfiring with a big fart – something Shakespeare’s audience would have loved! In this scene, after having killed the obnoxious Polonius and experiencing something of a high at the prospect of the fate he has devised for Rosenkrantz and Guildenstern, Hamlet is in a robust mood, and now that is augmented by the hearty laughter of the audience at the crude joke. 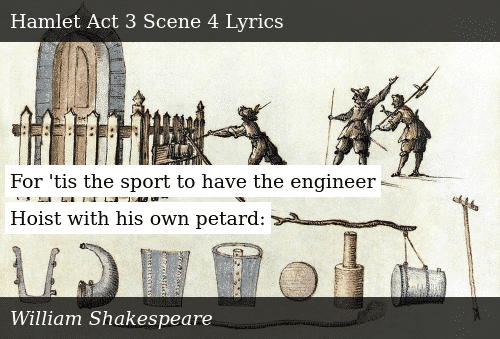