‘We happy few’ is a phrase from a speech by King Henry V in Shakespeare’s play Henry V.

It’s very easy to say that a particular passage – be it a soliloquy, a monologue, a speech, or a piece of dialogue – is the greatest passage in Shakespeare. ‘The greatest’ becomes meaningless because one could make the case for dozens – perhaps hundreds – of Shakespeare passages. However, ‘we happy few’ is a phrase from what is known as the Saint Crispin’s Day speech, a speech that is very special in many ways, and can certainly be referred to it one of the greatest passages in Shakespeare.

Context of ‘we happy few’ phrase

When King Henry V references ‘we happy few’ in his Saint Crispin’s Day speech, he is talking about his army – a select group of men serving directly under him and fighting alongside him at the Battle of Agincourt. They are brothers, forever bound together. Not only that but Henry tells them that any one of them shedding his blood with Henry will be his brother. They are part of a huge historical moment and will be forever envied by other soldiers for having been there.

‘We happy few’ are that select “band of brothers” who fought with King Henry at Agincourt, and are happy because they fought with their king, became his brothers, and will be celebrated forever. ‘Happy’ in this context means lucky or fortunate.

Men who were not there will consider themselves cursed for not having been there – they will think of themselves as inferior men, while those who were there will be held up as heroes. Survivors will celebrate the anniversary of the battle every year and be able to boast to their envious neighbours that they were there. They will roll up their sleeves and show everyone the scars they have from the wounds they sustained on St Crispin’s Day. Their sons will continue the annual celebration, so these men’s service will be remembered for eternity.

All that is a big sell, of course. A lot of men died in that battle and Henry knew they would and he also knew how to make them eager to go into battle and be killed. 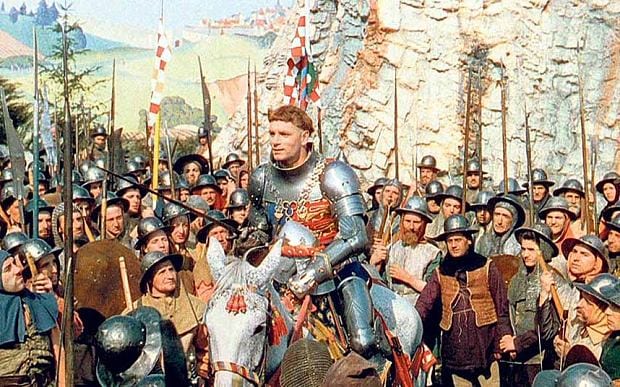 ‘We happy few’, in the St Crispin’s Day speech

Here it is – King Henry addressing his army on the eve of the Battle of Agincourt, from Act 4, Scene 3 of Henry V:

What’s he that wishes so?
My cousin Westmoreland? No, my fair cousin:
If we are mark’d to die, we are enow
To do our country loss; and if to live,
The fewer men, the greater share of honour.
God’s will! I pray thee, wish not one man more.
By Jove, I am not covetous for gold,
Nor care I who doth feed upon my cost;
It yearns me not if men my garments wear;
Such outward things dwell not in my desires:
But if it be a sin to covet honour,
I am the most offending soul alive.
No, faith, my coz, wish not a man from England:
God’s peace! I would not lose so great an honour
As one man more, methinks, would share from me
For the best hope I have. O, do not wish one more!
Rather proclaim it, Westmoreland, through my host,
That he which hath no stomach to this fight,
Let him depart; his passport shall be made
And crowns for convoy put into his purse:
We would not die in that man’s company
That fears his fellowship to die with us.
This day is called the feast of Crispian:
He that outlives this day, and comes safe home,
Will stand a tip-toe when the day is named,
And rouse him at the name of Crispian.
He that shall live this day, and see old age,
Will yearly on the vigil feast his neighbours,
And say ‘To-morrow is Saint Crispian:’
Then will he strip his sleeve and show his scars.
And say ‘These wounds I had on Crispin’s day.’
Old men forget: yet all shall be forgot,
But he’ll remember with advantages
What feats he did that day: then shall our names.
Familiar in his mouth as household words
Harry the king, Bedford and Exeter,
Warwick and Talbot, Salisbury and Gloucester,
Be in their flowing cups freshly remember’d.
This story shall the good man teach his son;
And Crispin Crispian shall ne’er go by,
From this day to the ending of the world,
But we in it shall be remember’d;
We few, we happy few, we band of brothers;
For he to-day that sheds his blood with me
Shall be my brother; be he ne’er so vile,
This day shall gentle his condition:
And gentlemen in England now a-bed
Shall think themselves accursed they were not here,
And hold their manhoods cheap whiles any speaks
That fought with us upon Saint Crispin’s day.

If there was ever a speech by a leader, motivating his men, making them feel proud to be serving with him, this is it, this is the model for leaders wanting to do that.

St Crispin’s Day is one of the hundreds of European saints’ days that have been forgotten by almost all of us, although several European villages and towns celebrate their own saint’s day. St Crispin’s Day, 25th October, would have been completely lost if it hadn’t been for this speech.

St Crispin’s Day is the feast day of both St Crispin and St Crispian, Roman twins, the joint patron saints of cobblers. The Vatican removed them from the saints’ list long ago because they had no evidence of their existence but Shakespeare put them back on the map with this speech.

‘We happy few’ in other media

The phrase ‘we happy few’ has seeped into popular culture, to the extent that a popular action-adventure survival horror video game has been developed called ‘We Happy Few’!