‘Two households, both alike in dignity’ is the opening line of Shakespeare’s play, Romeo and Juliet.

The play opens with a prologue in the form of a sonnet. Like all of Shakespeare’s sonnets it is dense and concentrated. A stage manager/actor comes on to the stage and tells the story of the play the audience is about to watch.

Two households, both alike in dignity,
In fair Verona, where we lay our scene,
From ancient grudge break to new mutiny,
Where civil blood makes civil hands unclean.
From forth the fatal loins of these two foes
A pair of star-cross’d lovers take their life;
Whose misadventured piteous overthrows
Do with their death bury their parents’ strife.
The fearful passage of their death-mark’d love,
And the continuance of their parents’ rage,
Which, but their children’s end, nought could remove,
Is now the two hours’ traffic of our stage;
The which if you with patient ears attend,
What here shall miss, our toil shall strive to mend.

The audience is presented with the background to the play – the feud and a recent outbreak of hostilities – and introduced to the two protagonists. We learn that they are from the opposing families of Verona, and that their relationship is doomed to inevitable failure because it is star-crossed. We are compensated by the assurance that their deaths unite the families. That’s the story. It is all there.

An analysis of the opening line offers the opportunity to demonstrate the kind of treatment English teachers often give to Shakespearean phrases – piling on interpretation after interpretation. Shakespeare’s texts can stand that but we should always remember that Shakespeare did not intend, nor did he dream, that forever after English teachers would pore over every word and over-interpret what he intended as pure entertainment.

However, there is something to be gained by looking at this line as an English teacher might.

The line is a critical part of understanding the conflict that leads to the tragedy of the play. The issues are ‘household’ and ‘dignity’.

This is about two families but Shakespeare chooses the word ‘household’, a broader term than what we would normally think of as family. The Elizabethan audience would immediately understand that Verona is more seriously divided than it’s being just a quarrel between blood families. Wealthy Renaissance families were something like the Mafia families we find in modern novels and gangster films. The family included servants, friends, business allies and everyone who had an interest in the business or social life of the family. Shakespeare uses the broader term, ‘household.’

The Montagues and Capulets are extremely wealthy and therefore very powerful. They are the largest families in Verona. Their members include associations by marriage, and a large family would also include doctors, priests, shopkeepers, tradesmen, and even military guards. All of these people would be considered a part of the extended family. Moreover, all of their property, valuables, and even their children would be part of the household.

Allegiance to one family inhibits association with the other. All those groups and different interests constitute a ‘household’ and there are loyalties involved that prevent other citizens from a free choice of who to associate with. And so, what we are presented with here is a hefty schism in the social and economic fabric of Verona that impedes its economy.

With these two powerful families in conflict, everyone in Verona is affected by their feud. It is no wonder that we see, not long after the action begins, that the Prince of Verona is heartily fed up with it and is threatening the death sentence for anyone who scratches the scab of this feud.

The conflict between these two households causes the tragic events of the play, and is responsible for unnecessary death and suffering on both sides.

The other significant word in this line is ‘dignity.’ We have seen how the economy of Verona is affected by the feud between these two families but such families’ influence goes beyond economic considerations. A rich household could control events in the smaller towns that orbit cities like Verona. For example, the members of a household could determine building projects,  political alliances, marriages, and defence throughout a wide area.

Households like the Montagues and Capulets would have been highly respected for miles around and, even without the feud, the two families would have been in competition for respect. The level of respect they achieve gives them their dignity. However, this is not a healthy competition because the whole idea of loyalty has been warped by the feud.

In the play we see this competition for dignity played out by Capulet’s scoop in finding a young nobleman to marry his daughter. Using the family’s money for that is a way of buying dignity and thus boosting the family socially. We don’t see what Montague is doing in that way in this play but we can be sure that he will be doing the same sort of thing. The two families are ‘alike’ in dignity so he will also have had his scoops.

The two families are a parallel throughout and both are brought down by the same event at the end of the play – the death of their children. But peace comes to Verona with a truce between the two families, and that has wider implications in that it restores the whole region to a healthy state. 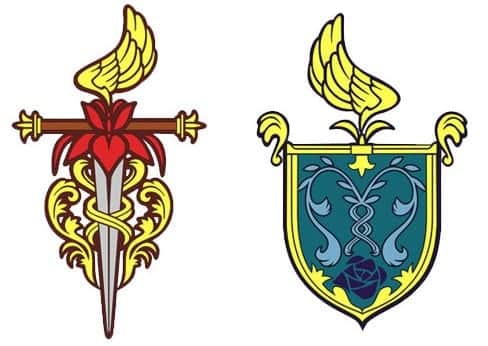 Family crests of the two houses, both alike in dignity – Montagues & Capulets