The Merry Wives of Windsor Quotes

Looking for The Merry Wives of Windsor quotes? Read our selection of the very best quotes from The Merry Wives of Windsor, along with speaker, act and scene. The play is one of Shakespeare’s comedies exploring what makes a suitable marriage partner, with a strong feminist theme where the women triumph over the men. As in so many of his plays Shakespeare brings the characters to life with memorable dialogue and some fantastic quotes.

Read on below for the most well known The Merry Wives of Windsor quotes:

All his successors – gone before him – hath done’t, and all his ancestors – that come after him – may.

O base Hungarian wight! Wilt thou the spigot wield?

Thou art the Mars of malcontents.

Here will be an old abusing of God’s patience and the King’s English.

I love not the humour of bread and cheese.

Revenged I will be, as sure as his guts are made of puddings.

If money go before, all ways do lie open.

Why, then the world’s mine oyster, which I with sword will open.

Marry, this is the short and the long of it.

Setting the attractions of my good parts aside, I have no other charms.

Falstaff: Of what quality was your love, then?
Ford: Like a fair house built on another man’s ground

Better three hours too soon than a minute too late.

I would I could wash myself of the buck. Buck, buck, buck!

Alas, I had rather be set quick i’ th’ earth
And bowled to death with turnips!

I will be thrown into Etna, as I have been into Thames, ere I will leave her thus.

A man of my kidney.

Why, woman, your husband is in his old lines again: he so takes on yonder with my husband, so rails against all married mankind, so curses all Eve’s daughters of what complexion soever.

Wives may be merry, and yet honest too.

I rather will suspect the sun with cold
Than thee with wantonness.

The devil take one party, and his dam the other, and so they shall both be bestowed.

O powerful Love, that in some respects makes a beast a man, in some other a man a beast.

I think the devil will not have me damned, lest the oil that’s in me should set hell on fire.

In love the heavens themselves do guide the state.
Money buys lands, and wives are sold by fate.

I will never take you for my love again, but I will always count you my deer.

To Master Brook you yet shall hold your word,
For he tonight shall lie with Mistress Ford.

Are we missing any great The Merry Wives of Windsor quotes? Let us know in the comments section below. 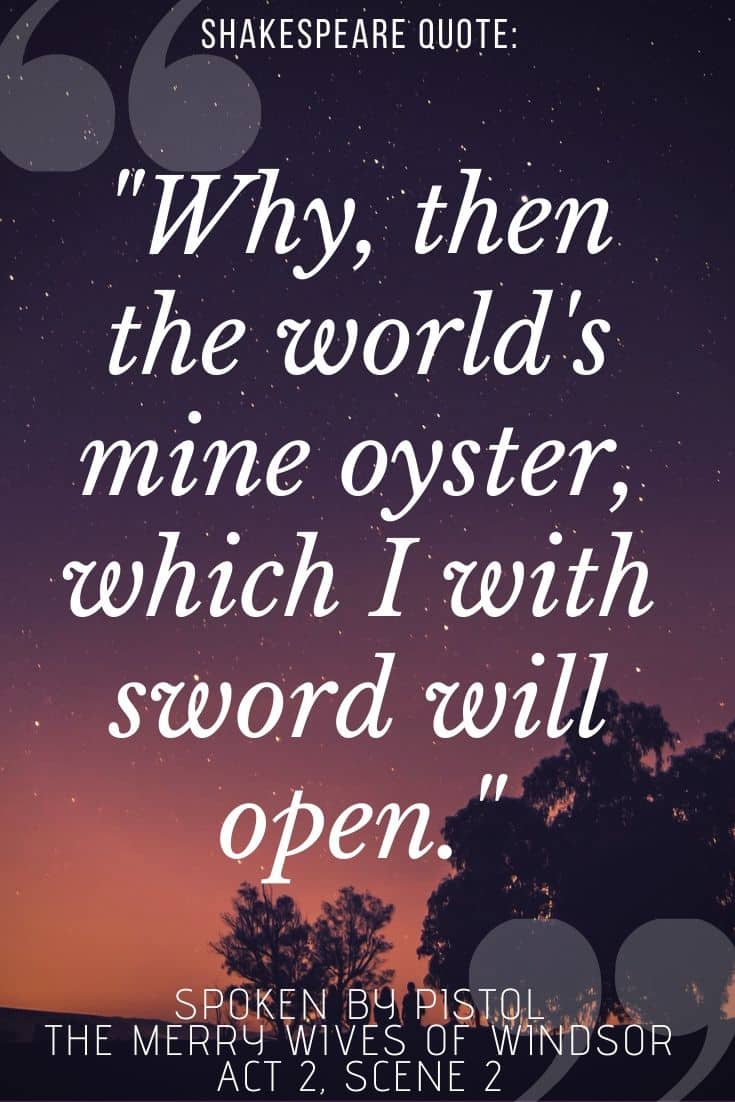