‘There Are More Things In Heaven And Earth’, Meaning & Context

In Act 1 Scene 5 of Shakespeare’s play, Hamlet, Hamlet says to his friend:

“There are more things in Heaven and Earth, Horatio, than are dreamt of in your philosophy.”

Hamlet has been told by the night watch that the ghost of his father has appeared to them. Hamlet and his friend, Horatio go up to the battlements and the ghost appears. Horatio is a practical, down to earth scholar and he is stunned by this – he doesn’t believe in ghosts. He says: “O day and night, but this is wondrous strange.” Hamlet replies: “There are more things in Heaven and Earth, Horatio, than are dreamt of in your philosophy.” He is suggesting that the human imagination is limited and that there are many things we don’t know, things that haven’t been discovered and, in fact, things we haven’t even dreamt of. 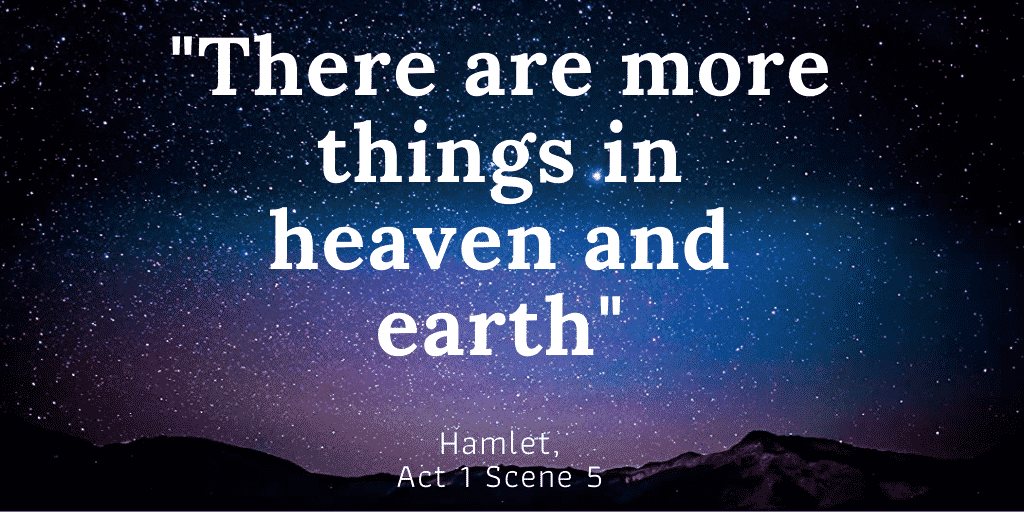 “There are more things in heaven and earth”, Hamlet quote

Meaning of “There are more things in Heaven and Earth”

It is here that we see Shakespeare for what he is. Besides being the greatest poet who ever wrote English poetry and the most brilliant writer of stage entertainment, he also had insights far beyond those of his contemporaries: he understood that the knowledge about the world that scientists and explorers had discovered, was only the beginning of what there is that we don’t yet know about, of what is still waiting for us to discover, and that, in fact, taking into account the work being done by astronomers, a lot more beyond the earth too. He was very aware of the limitations of the human imagination and, in fact, he was right and we are still being stunned by new discoveries, both about our planet and the universe.

The discovery of what there is in Heaven and Earth

Shakespeare’s contemporary, Galileo Galilei, pioneered the use of the telescope for observing the night sky. He discovered that the earth was not at the centre of a perfect and unchanging cosmos, and that, in reality, the Earth revolved around the Sun instead of the other way round, and that it was its spinning that produced night and day.  He was persecuted by the Church for his undermining of the traditional idea of how God had created the universe. Human beings had not imagined such a thing before that.

Shakespeare’s contemporaries believed that human beings had been created fully formed by God in a paradisiacal garden. Charles Darwin’s Origin of the Species outlined in detail, the evolution of human beings, from a single cell entity over billions of years, to what they are now, and still evolving, to a condition in the future, which, again, is beyond our imaginations. He also showed that we are actually apes, and are closely related to the likes of chimpanzees and gorillas, having a common ancestor.

Scientific discoveries have put science at odds with religion. Scientists are usually agnostic concerning the existence of God, whereas religious men and women insist on His existence. The difference is that religion is based on faith – the belief in God, rather than knowing that He exists, although they will say that they know He does. Scientists say that we don’t know and it is only when he has been scientifically verified – when we have discovered Him  – that we will be able to say that we know.

When Shakespeare puts “There are more things in Heaven and Earth than are dreamt of in your philosophy” into the mouth of one of his characters he is demonstrating what the scientists of our time now know. He is showing how different his thinking is from most of the people of his time, who believed what the Church insisted on: that it had everything worked out for all time.

Shakespeare demonstrates his timeless, universal, understanding over and over again in the profound things he puts into the mouths of his characters. Such as:

The fault, dear Brutus, is not in our stars, but in ourselves, that we are underlings.

One touch of nature makes the whole world kin

The common curse of mankind – folly and ignorance.

Life’s but a walking shadow, a poor player,
That struts and frets his hour upon the stage,
And then is heard no more. It is a tale
Told by an idiot, full of sound and fury,
Signifying nothing.

The fool doth think he is wise, but the wise man knows himself to be a fool.

There is nothing either good or bad, but thinking makes it so.

It is not in the stars to hold our destiny but in ourselves.

Some are born great, some achieve greatness, and some have greatness thrust upon them

There is no darkness but ignorance

We know what we are, but know not what we may be