Shakespeare uses the phrase “high time” in his play, The Comedy of Errors.

“It’s high time” is used for saying that something should be done soon because the time that it should have been done has already passed. For example: “It’s high time she got that promotion. She’s been passed over too many times.”

It also means “the last possible moment.” For example:. “Get up now. It’s high time you left for school: you’re going to be late.”

Another meaning is “it’s time to do something that should have been done long ago.” For example: “It’s high time that we cleared out the junk in the shed.”

One of the things Shakespeare is most famous for as a writer is his genius for making exactly the right combination of words to express precisely the thought or emotion he wants to convey. Because those word combinations were so perfect and so truthful they became the definitive way of expressing that truth. For example, ‘all that glisters is not gold’ is a complete and complex lesson on the need not to judge things on their surface appearance, but expressed very simply and beautifully, and requiring nothing more to be said.

That frequently results in enduring idioms, and in that way Shakespeare has quite a lot of responsibility for the richness of the English language as we enjoy it today.

However, Shakespeare was a voracious reader, interested in all areas of life – history, philosophy, science, poetry, and so on – and he had the kind of mind that stored the things that he thought he would find useful at a later time, so his plays and poems are full of words and phrases that he came across in his reading and that he stored for use in his writing. “High time” is one of those borrowed phrases.

He could have come across the phrase “high time” in many of the things he read:

Shakespeare’s use of “high time”

In The Comedy of Errors, Antipholus of Syracuse talks about leaving Ephesus, as the city is full of witches and other women who insist that he and his servant, Dromio, are their husbands. He doesn’t just say that it’s time to leave but expresses a sense of urgency by saying that it’s “high” time to leave.

There’s none but witches do inhabit here;
And therefore ’tis high time that I were hence.
She that doth call me husband, even my soul
Doth for a wife abhor. But her fair sister,
Possess’d with such a gentle sovereign grace,
Of such enchanting presence and discourse,
Hath almost made me traitor to myself:
But, lest myself be guilty to self-wrong,
I’ll stop mine ears against the mermaid’s song. 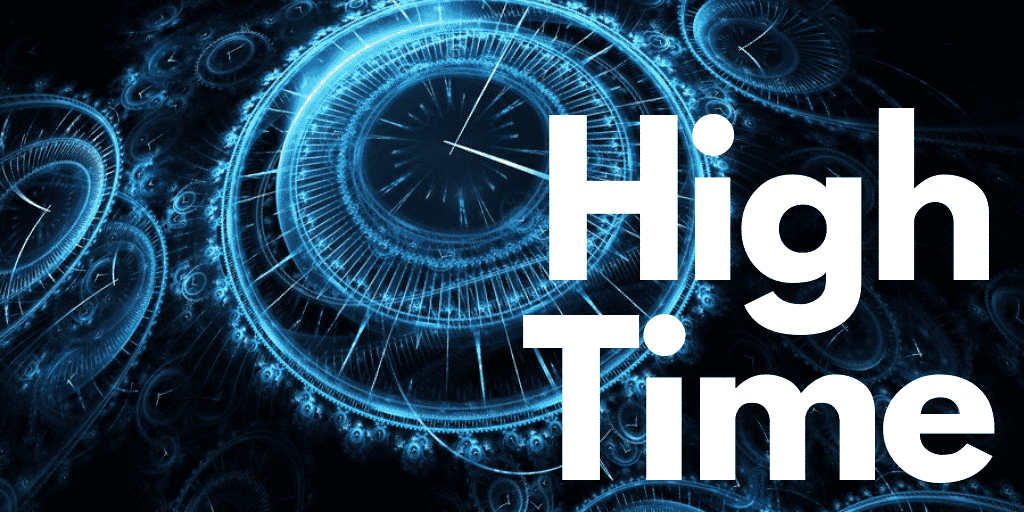 “…very few words were spoken; and everybody seemed to eat his utmost in self-defence, as if a famine were expected to set in before breakfast time to-morrow morning, and it had become high time to assert the first law of nature”

In Tolkien’s The Fellowship of the Ring:

“It was now past midday and they felt it was high time for lunch.”