‘In My Heart Of Hearts’, Meaning & Context

The idiom ‘in my heart of hearts’ is a statement of belief in something one strongly believes to the extent of knowing it, even if others disagree that such a belief or piece of knowledge is valid.

One could say ‘In my heart of hearts I know that I am immortal,’ and although everyone else would be sure it was nonsense and the speaker was delusional, the speaker is saying that in spite of the surrounding scepticism she really believes it. 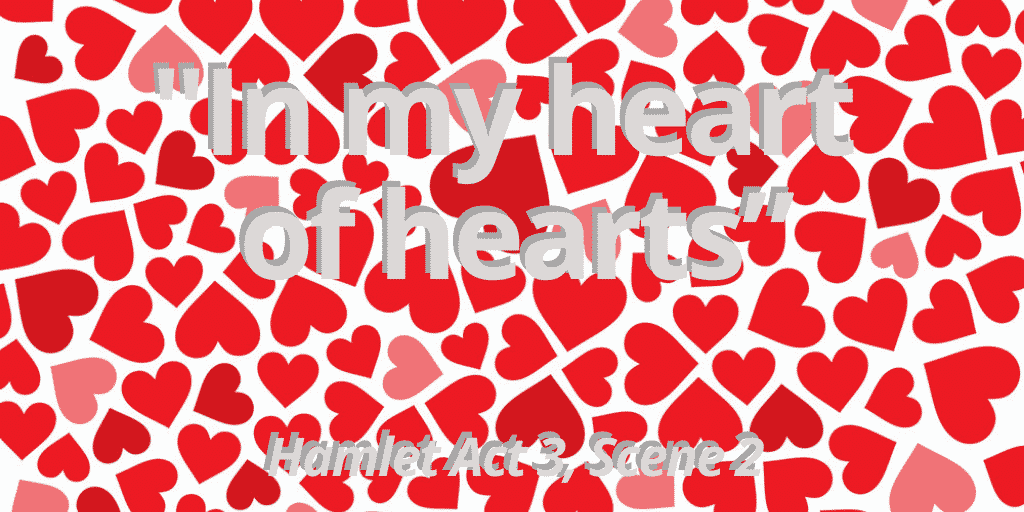 Shakespeare’s “In my heart of hearts” phrase

Origin of ‘In my heart of hearts’

The phrase appears in Shakespeare’s play Hamlet, Act 3 Scene 2. It is slightly different from the way the idiom has ended up in that it is ‘heart of heart’ (singular) in Hamlet rather than ‘heart of hearts’ (plural) in the idiom.

In that modern usage the meaning has changed, or developed. When Shakespeare’s Prince Hamlet used it he meant the core – the centre – of his heart. There is a sense in that we still use it like that in its modern usage. When Hamlet says that he will carry a man who is not passion’s slave in the very core of his heart he is saying that he really believes in that man.

Talking to his friend , the only character with whom he is able to communicate in a straightforward way, he says:

“Give me that man
That is not passion’s slave, and I will wear him
In my heart’s core, ay, in my heart of heart,
As I do thee.”

He is paying tribute to his friend, saying that Horatio is just about the only person he knows who is not governed by his emotions but who is capable of rational thought and that that is something he values above anything else in the people he comes into contact with. Horatio is the only person in the play Hamlet trusts. Because of Hamlet’s different, sometimes bizarre, interactions with the other characters Shakespeare uses the device of the soliloquy to help us understand what’s really in Hamlet’s mind. He also uses Hamlet’s friendship with Horatio, making Horatio his confidant, so that when Hamlet talks to Horatio we know that the things he says are direct, and not the winding up kind of things he says to the other characters.

So he is saying that he will hold such people – like Horatio – in the deepest recesses of his being, deep in the centre of his heart. From that meaning – in the centre of one’s heart – the phrase has evolved to mean having a strong, indelible belief in something.

Synonyms of  ‘In my heart of hearts’

inwardly, inside, internally, within, deep down, deep down inside, deep within, at heart, in one’s mind, to oneself privately, secretly, confidentially

Other idioms about the heart