Looking for Henry VIII quotes? Read our selection of the very best quotes from Henry VIII, along with speaker, act and scene. This history play with Shakespeare deals with power and corruption. and the search for immortality, reflected in Henry’s obsession with producing a male heir. As with so many of his plays Shakespeare brings the characters to life with memorable dialogue and some great quotes.

Read on below for the most well known and significant Henry VIII quotes:

Anger is like
A full-hot horse, who being allow’d his way,
Self-mettle tires him.

Be to yourself
As you would to your friend.

Heat not a furnace for your foe so hot
That it do singe yourself.

‘Tis but the fate of place, and the rough brake
That virtue must go through.

If I chance to talk a little wild, forgive me;
I had it from my father.

Go with me, like good angels, to my end;
And, as the long divorce of steel falls on me,
Make of your prayers one sweet sacrifice,
And lift my soul to heaven.

The mirror of all courtesy.

Heaven will one day open
The king’s eyes, that so long have slept upon
This bold bad man.

‘Tis better to be lowly born,
And range with humble livers in content,
Than to be perked up in a glist’ring grief,
And wear a golden sorrow.

Orpheus, with his lute made trees,
And the mountain tops that freeze,
Bow themselves when he did sing.

I have touched the highest point of all my greatness,
And from that full meridian of my glory,
I haste now to my setting. I shall fall
Like a bright exhalation in the evening,
And no man see me more.

I feel within me
A peace above all earthly dignities,
A still and quiet conscience.

A load would sink a navy: too much honour.

I shall fall
Like a bright exhalation in the evening,
And no man see me more.

Press not a falling man too far!

I charge thee, fling away ambition:
By that sin fell the angels.

Love thyself last: cherish those hearts that hate thee;
Corruption wins not more than honesty.
Still in thy right hand carry gentle peace,
To silence envious tongues. Be just, and fear not:
Let all the ends thou aim’st at be thy country’s,
Thy God’s, and truth’s; then if thou fall’st, O Cromwell,
Thou fall’st a blessed martyr!

He was a man
Of an unbounded stomach.

Men’s evil manners live in brass, their virtues
We write in water.

He was a scholar, and a ripe and good one;
Exceeding wise, fair-spoken, and persuading:
Lofty and sour to them that loved him not;
But, to those men that sought him, sweet as summer.

‘Tis a cruelty
To load a falling man.

They are too thin and bare to hide offences.

A most unspotted lily shall she pass
To the ground, and all the world shall mourn her.

I do not ask you much,
I beg cold comfort

This England never did, nor never shall,
Lie at the proud foot of a conqueror,
But when it first did help to wound itself.
Now these her princes are come home again,
Come the three corners of the world in arms,
And we shall shock them. Nought shall make us rue,
If England to itself do rest but true.

Are we missing any great Henry VIII quotes? Let us know in the comments section below. 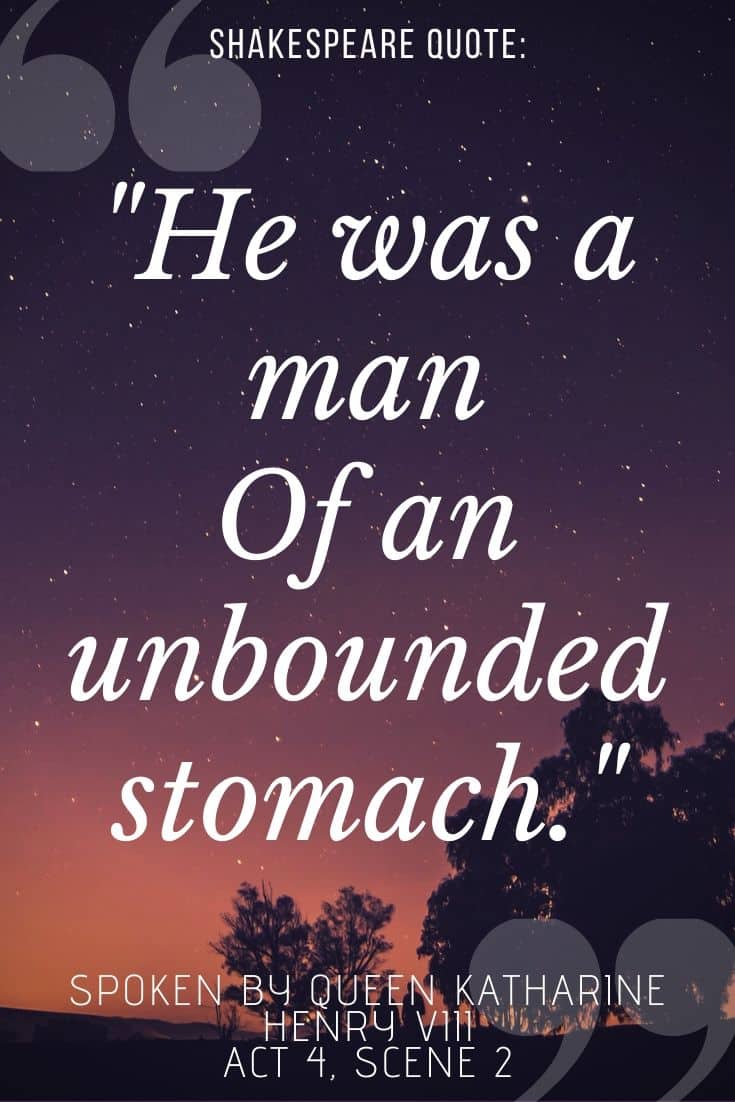