The context of Marc Antony’s famous line comes when Julius Caesar lies dead, having been assassinated by a group of conspiratorial senators. Marc Antony, another army general, is allowed to approach the body, and negotiates with the conspirators to allow his to make a speech to the people – as long as he promises not to say anything negative about them.

While the conspirators are outside, addressing the people, Marc Antony is left alone with Caesar’s body. He swears that he is going to get his revenge against the conspirators. He says that there is going to be a war the likes of which no-one has ever seen. He then invokes the image of a general crying havoc and releasing the dogs of war.

O, pardon me, thou bleeding piece of earth,
That I am meek and gentle with these butchers!
Thou art the ruins of the noblest man
That ever livèd in the tide of times.
Woe to the hand that shed this costly blood!
Over thy wounds now do I prophesy—
Which, like dumb mouths, do ope their ruby lips
To beg the voice and utterance of my tongue—
A curse shall light upon the limbs of men.
Domestic fury and fierce civil strife
Shall cumber all the parts of Italy.
Blood and destruction shall be so in use,
And dreadful objects so familiar,
That mothers shall but smile when they behold
Their infants quartered with the hands of war,
All pity choked with custom of fell deeds,
And Caesar’s spirit, ranging for revenge,
With Ate by his side come hot from hell,
Shall in these confines with a monarch’s voice
Cry “Havoc!” and let slip the dogs of war,
That this foul deed shall smell above the earth
With carrion men, groaning for burial.

The image conjured in the line ‘Cry ‘Havoc!’ and let slip the dogs of war’ is one of Shakespeare’s finest poetic moments. Not only does it have Marc Antony find the precise way of expressing what he wants to say, but the combination of crying havoc and the visual image of attack dogs straining at their collars is just a perfect image, and it is no wonder that the line has taken its place as one of the top idioms in the English language.

The word ‘havoc’ would probably be lost to us today if it hadn’t been for Shakespeare’s use of it – in fact, several times in his plays. However, as it is, its meaning hasn’t changed from Mediaeval times. It means a combination of disruptive forces – chaos, confusion, disorder, devastation, turmoil, turbulence, lawlessness. And we still use it in that way today.

Crying havoc was the act of shouting an instruction by a military commander. It was customary for soldiers to remain in their disciplined state throughout a battle, and do everything to win in that way. And then, once victory had been achieved, the commander would shout ‘Havoc!’ That was the signal for the soldiers to break ranks and rush in to plunder, rape and pillage in the defeated territory.

The ‘dogs of war’ are the soldiers. Shakespeare uses the metaphor of attack dogs. Letting slip introduces another word – ‘slip’ – which is an action in training attack dogs. The term ‘slip collar’ is still used in connection with the training of dogs, where the slip collar tightens around the dog’s neck and, controlled by the handler, restrains it from its natural desire to run freely. The collar can be released and thrown off by using a trigger device, allowing the dog to charge forward. That is known as ‘slipping’ the dog.

So we have the image here of soldiers, having won a battle, raring to go into the city or town and loot, but not being able to do so until given the order. When the commander is ready he shouts the order: ‘Havoc!!!!’ and the soldiers rush forward like attack dogs with their slip collars thrown off.

This is Shakespeare at his best, finding the perfect image for the situation. 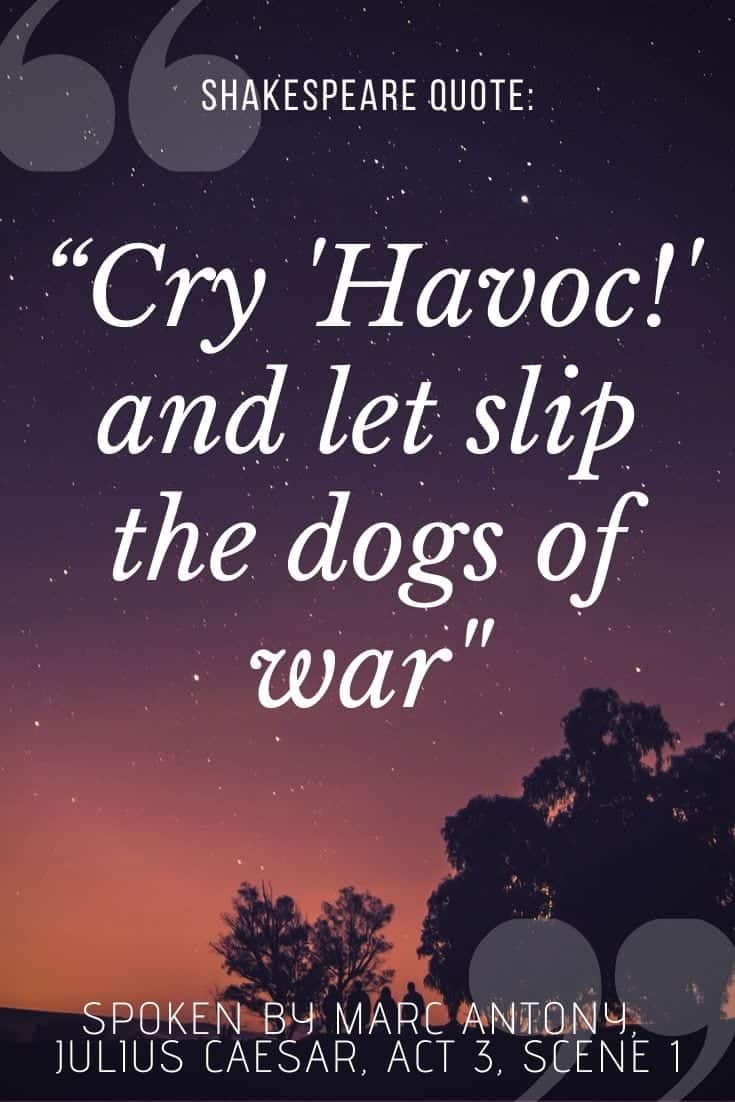 1 comment(s) need to be approved.
5 replies