On one level the “mind’s eye” is a very simple thing – it means one’s mental image, or what one imagines.

On another level, it refers to something that actually happens in the brain. We process visual information with the visual cortex that takes snapshots of the world around us and feeds them to the brain. The brain then fills in the blanks and presents the illusion of continuity, allowing you to see the world as continuous and dynamic. In that sense the mind has an eye – the visual cortex.

The idiom – seeing with the mind’s eye means to imagine something by “seeing” it without actually seeing it with your eyes. For example, on a cold winter day you may imagine yourself sunbathing on a hot beach by seeing that in your mind’s eye.

It is also one of the ways that blind people are able to make sense of the world, particularly those who had, at some point, been able to see. They may not be able to see the things around them but are able to imagine them.

The mind’s eye is also a major part of one’s memory. 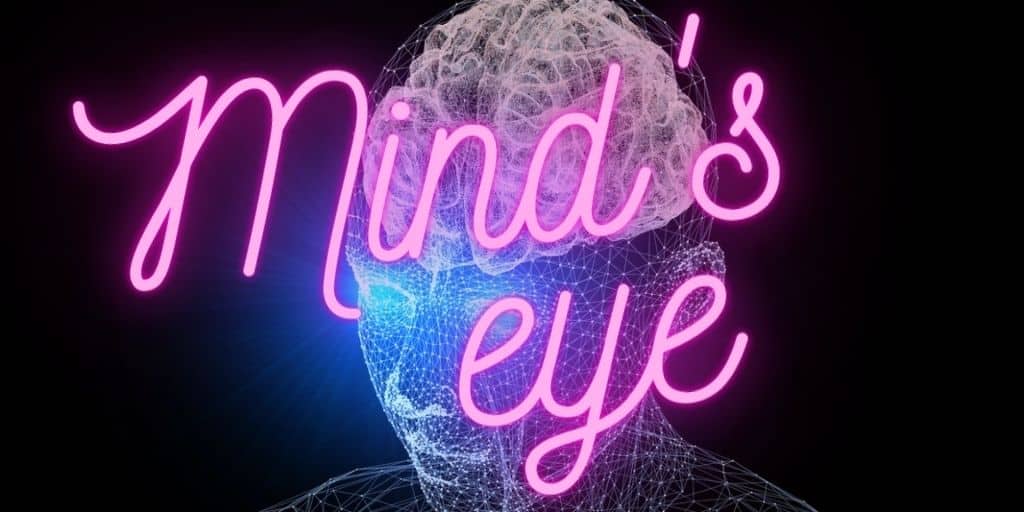 Chaucer’s User Of  ‘An Eye In The Mind‘

The idea of the imagining something being like seeing it with an eye in the mind is an old idea, and we see one of the first references in the fourteenth century in a work by the English poet, Geoffrey Chaucer. In his great poem, The Canterbury Tales in The Man of Law’s Tale he writes:

‘It were with thilke eyen of the mynde. With which men seen, after that they been blynde.’

Descartes and ‘The Mind’s Eye’

The idea of being able to form images in the mind is a favourite pursuit of philosophers. Descartes wrote that we have some kind of inner self in our mind that watches the thoughts that come in as though it were watching a play in the theatre.

The use of the phrase ‘Mind’s Eye‘ before Shakespeare

Chaucer’s ‘eye of the mind’ is differently worded from the idiom, however. The first time we see it in that form is in the correspondence between Sir Philip Sidney and Hubert Languet, where Languet writes “What will not these golden mountains effect … which I dare say stand before your mind’s eye day and night?”

‘The Mind’s Eye’ in Shakespeare

But, of course, as is usual when Shakespeare uses any term it becomes the most prominent and the best-known example.  In his 1602 play, Hamlet, in a conversation between Hamlet and his friend, Horatio, when Hamlet is talking about his father:

HAMLET:
Thrift, thrift, Horatio! the funeral baked meats
Did coldly furnish forth the marriage tables.
Would I had met my dearest foe in heaven
Or ever I had seen that day, Horatio!
My father! – methinks I see my father.

HORATIO:
Where, my lord?

HAMLET:
In my mind’s eye, Horatio.’

In this context Hamlet is using the phrase to refer to his memory, and later in the play, when talking to his mother, he describes his father in detail. In that scene he uses a picture of his father, so is combining that concrete image with the one in his mind’s eye.