‘What The Dickens’, Meaning & Context

“What the dickens!” is an exclamation that for some reason sends our minds quite naturally to one of our great writers, Charles Dickens. However, the phrase was as much in use in the sixteenth century as it was in Dicken’s time.

One of its earliest literary appearances is in a Shakespeare play – The Merry Wives of Windsor (Act 3, Scene 2) where Mistress Page exclaims:

“I cannot tell what the dickens his name is ….”

So, if not a reference to Charles Dickens, where does the phrase come from? What does “dickens” mean in this context?

Origin of “What the dickens!”

There’s a very simple answer to this. “Dickens” was originally a euphemism for the word “Devil.”

In times past – and even now – there have been some people reluctant to directly reference the devil. And in fact, people who also regard using words like “hell,” “God,” “Jesus Christ” as exclamations in everyday conversation as something they don’t like to do, have, over time, developed euphemisms that they find acceptable. So they may say, “This is a heck of a mess,” or “Oh my gosh,” or “Jeepers Creepers.”

In the modern world, people regard sexual rather than religious references as swearing and until recently some of those words have been taboo in polite society, in front of children, and in the media. They are now more freely used in all those contexts. Using the “F” word in most contexts is unexceptionable, although one would still be advised not to use it during an interview for a job, or in most other formal social situations.

Back in Shakespeare’s time, swearing meant the serious undertaking of something, where one would swear an oath, rather as we do in court today when giving evidence, promising to tell the truth and not lie. In America witnesses still say “so help me God,” when swearing, challenging Him to throw down punishment if they lie.

Sexual language was quite normal in Shakespeare’s time, although not used as an expletive in the way that it is today. It was the religious language that made up the rude, unacceptable vocabulary that you would not use in polite society.

‘What the Devil” or “the Devil take you” were very serious curses but “the dickens” could be freely used in those days in the same way as a deeply religious person in our own time may say, “oh gosh!” or “Jeepers Creepers!” without blushing or risking eternal condemnation for taking the name of the Lord in vain! 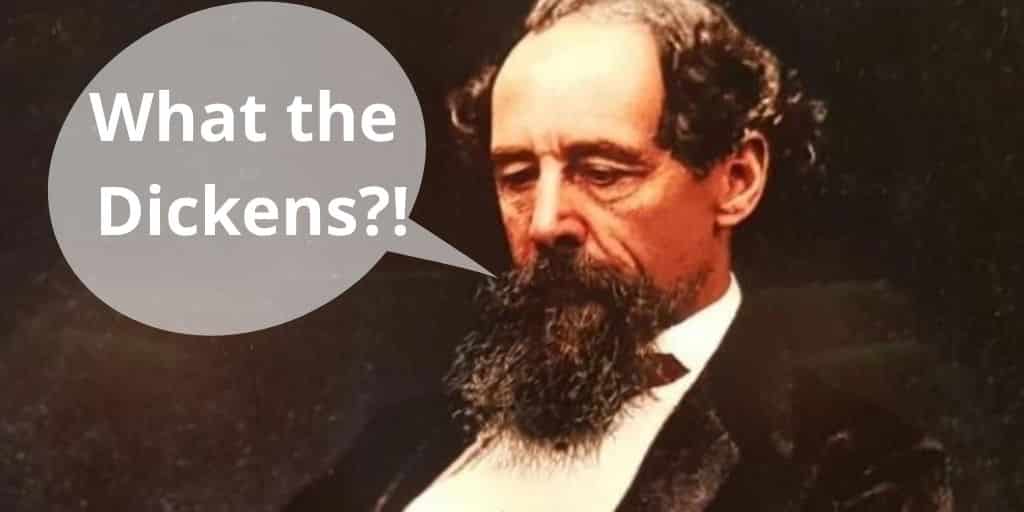 Charles Dickens quoting ‘What the Dickens?!’