The monologues from Macbeth below are the best known and most significant monologues from the play in the order that they’re spoken, along with the speaker, act and scene. This page has only Macbeth monologues; you can find the top Macbeth soliloquies here. Not sure the difference between the two? Read this article.

Doubtful it stood;
As two spent swimmers, that do cling together
And choke their art. The merciless Macdonwald.
Worthy to be a rebel, for to that
The multiplying villanies of nature
Do swarm upon him.from the western isles
Of kerns and gallowglasses is supplied;
And fortune, on his damned quarrel smiling,
Show’d like a rebel’s whore: but all’s too weak:
For brave Macbeth–well he deserves that name.
Disdaining fortune, with his brandish’d steel,
Which smoked with bloody execution,
Like valour’s minion carved out his passage
Till he faced the slave;
Which ne’er shook hands, nor bade farewell to him,
Till he unseam’d him from the nave to the chaps,
And fix’d his head upon our battlements…

As whence the sun ‘gins his reflection
Shipwrecking storms and direful thunders break,
So from that spring whence comfort seem’d to come
Discomfort swells. Mark, king of Scotland, mark:
No sooner justice had with valour arm’d
Compell’d these skipping kerns to trust their heels,
But the Norweyan lord surveying vantage,
With furbish’d arms and new supplies of men
Began a fresh assault…

As sparrows eagles, or the hare the lion.
If I say sooth, I must report they were
As cannons overcharged with double cracks, so they
Doubly redoubled strokes upon the foe:
Except they meant to bathe in reeking wounds,
Or memorise another Golgotha,
I cannot tell.
But I am faint, my gashes cry for help.

Was the hope drunk
Wherein you dress’d yourself? hath it slept since?
And wakes it now, to look so green and pale
At what it did so freely? From this time
Such I account thy love. Art thou afeard
To be the same in thine own act and valour
As thou art in desire? Wouldst thou have that
Which thou esteem’st the ornament of life,
And live a coward in thine own esteem,
Letting ‘I dare not’ wait upon ‘I would,’
Like the poor cat i’ the adage?…

What beast was’t, then,
That made you break this enterprise to me?
When you durst do it, then you were a man;
And, to be more than what you were, you would
Be so much more the man. Nor time nor place
Did then adhere, and yet you would make both:
They have made themselves, and that their fitness now
Does unmake you. I have given suck, and know
How tender ’tis to love the babe that milks me:
I would, while it was smiling in my face,
Have pluck’d my nipple from his boneless gums,
And dash’d the brains out, had I so sworn as you
Have done to this.

My former speeches have but hit your thoughts,
Which can interpret further: only, I say,
Things have been strangely borne. The gracious Duncan
Was pitied of Macbeth: marry, he was dead:
And the right-valiant Banquo walk’d too late;
Whom, you may say, if’t please you, Fleance kill’d,
For Fleance fled: men must not walk too late.
Who cannot want the thought how monstrous
It was for Malcolm and for Donalbain
To kill their gracious father? damned fact!
How it did grieve Macbeth! did he not straight
In pious rage the two delinquents tear,
That were the slaves of drink and thralls of sleep?
Was not that nobly done? Ay, and wisely too;
For ‘twould have anger’d any heart alive
To hear the men deny’t. So that, I say,
He has borne all things well: and I do think
That had he Duncan’s sons under his key–
As, an’t please heaven, he shall not–they should find
What ’twere to kill a father; so should Fleance.
But, peace! for from broad words and ’cause he fail’d
His presence at the tyrant’s feast, I hear
Macduff lives in disgrace: sir, can you tell
Where he bestows himself?

What do you think of the above monologues from Macbeth – any great ones that we’re missing? Let us know in the comments below! 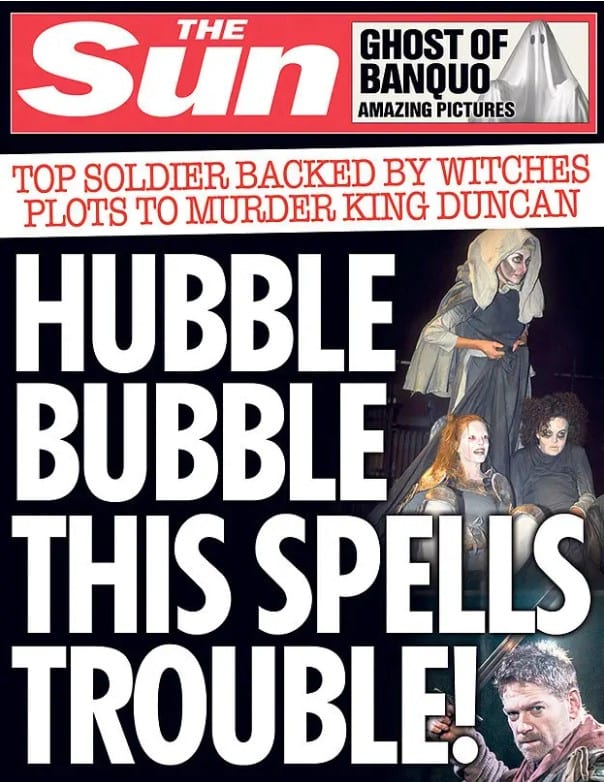 The Sun’s take on the Macbeth story