‘Elbow room’ is a phrase coined by Shakespeare that refers in the physical sense to the literal space around a person, which enables them to move and function in some enterprise. The phrase also applies, in the metaphorical sense, to non-physical spaces – for example, the freedom one needs to operate in a multiplicity of contexts without hindrance.

The origin of ‘elbow room’ as an idiom

The elbow is a part of the human body – the middle, moveable, joint in the arm. It appeared as a word in the English language more than a thousand years ago. However, elbow room is a strange idea. Why does one need room for one’s elbow? We can think about the elbow wrestling we engage in when sitting next to a stranger on an aeroplane, where comfort is increased or decreased depending on one’s ownership on the rest between two seats.

But once again we have to contend with Shakespeare. He put the two words together to create yet another of his visual metaphors to refer to something abstract and, hey presto, we have another universal image and an enduring idiom.

Shakespeare yoked the two words together in King John, where, in Act 5 Scene 7 the king says:

“Ay, marry, now my soul hath elbow-room;
It would not out at windows nor at doors.
There is so hot a summer in my bosom,
That all my bowels crumble up to dust:
I am a scribbled form, drawn with a pen
Upon a parchment, and against this fire
Do I shrink up.”

“All out of the kitchen,” said Mother. “I’ll call you when breakfast is ready. I need some elbow room.”

I was thrilled as we took the stage. I couldn’t believe how many people came to hear us. There was totally no elbow room.

You will have the laboratory to yourself. No-one will bother you – you’ll have all the elbow room you want.

He follows me wherever I go. I can’t get rid of him – he gives me no elbow room.

The essay title the teacher gave us is far too limited. She hasn’t given us much elbow room to expand on the topic.

Some uses of ‘elbow room’ in literature

“Birds in the Bush” by Bradford Torrey

It never made elbow-room for that free if sometimes frigid figure called the Citizen.

“What I Saw in America” by G. K. Chesterton

I need elbow-room for my signature.

Give me plenty of elbow room or give me death!

All this attention was too much for a bluejay, who always wants plenty of elbow room in this wide world.

“Little Brothers of the Air” by Olive Thorne Miller 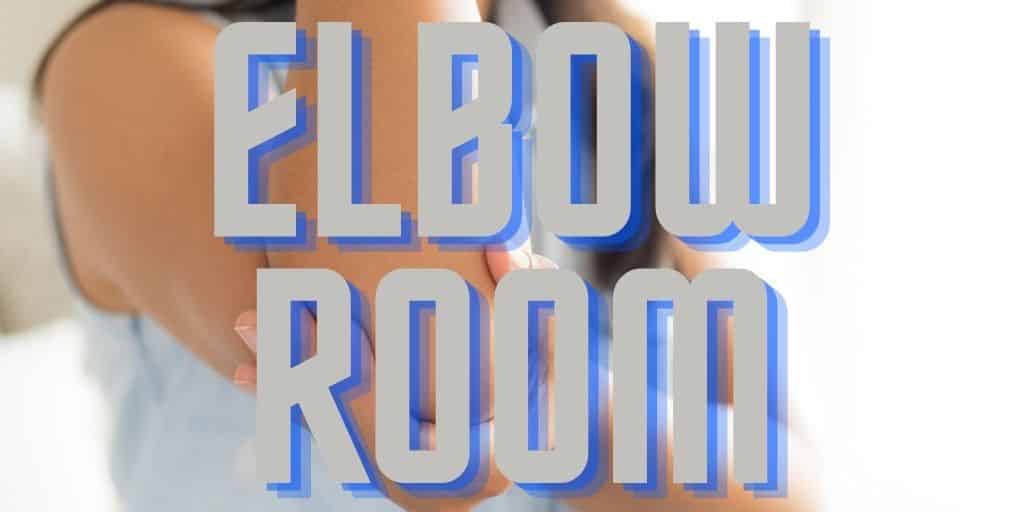 The philosophical idea of free will has been debated for centuries. Free will has been seen as the elbow room necessary for a human being to have some real choice in their behaviour. The American philosopher, Daniel Dennett gave a series of lectures on the topic of free will. They were published as a book in 1984: “Elbow Room: The Varieties of Free Will Worth Wanting”. Dennett explored what it meant for a person to have free will:

[The question is] ‘are we deterministic machines with no freedom of action or do we have the elbow room (space for real choice) in our behaviour?’

“Elbow room” can be replaced in a sentence by any of the following, and more, words, depending on the context but because of Shakespeare we have a nice visual image of the condition:

And so we see that “elbow room” is an idiom, inspired by an image in Shakespeare. It can have either a literal or metaphorical meaning, in that, apart from the space needed to move physically, it can also refer to intellectual space or individual freedom.