‘Call It A Day’, Meaning & Context

Meaning of ‘call it a day’

To stop doing something, especially with regard to working, to give up work and go home, to finish work for the day, or to stop some other regular activity.

Example sentences could be

Origin of ‘call it a day’

The idiom began with the phrase ‘call it half a day,’ originally recorded in 1838, when it was used to refer to employees who went home before the working day was over. That is when the attendance records had his workdays mentioned as half days. Since then, whenever the employees were not working in the office for the entire workday, their superiors would call it ‘half a day’ to make sure that their salaries would have deductions according to the no. of half days. Later, this phrase was transformed into ‘call it a day’ which means that work on that particular day is completely over. In the year 1919, the very first use of ‘call it a day’ was recorded, and since then, has been used by many people and companies worldwide, and from there it became used as an idiom. 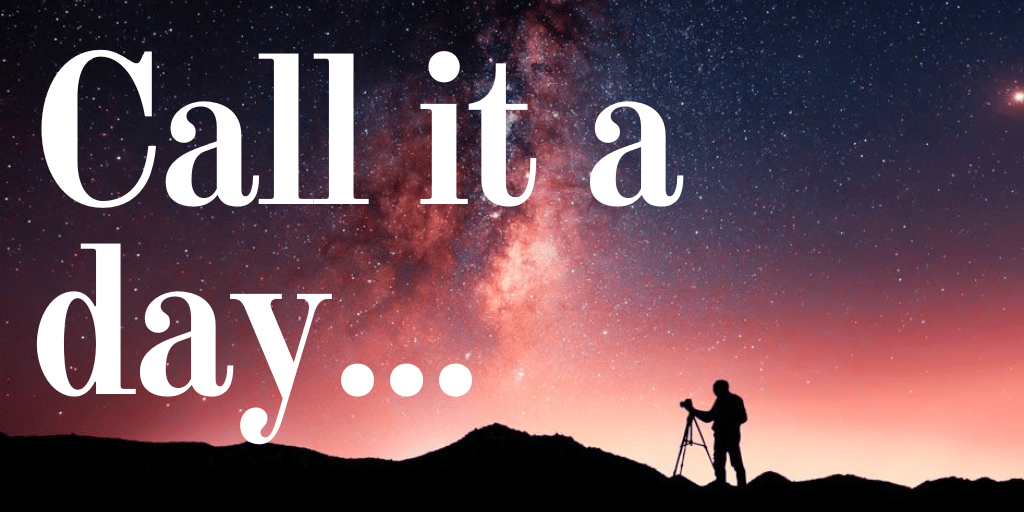 Idiom – Call it a day

Call it a night

Related phrases are calls it a night, called it a night, calling it a night. The film is about a day in the life of a middle-class London family whose lives are complicated by the first romantic signs of spring.

Make a day of it.

Day in day out.

Back in the day.

It’s just one of those days.

In this day and age.

Save something for a rainy day.

Days of wine and roses.

Different as night and day.

Every dog has its day.

Call it a Day in culture

Dodie Smith, the author of 101 Dalmations wrote a play, Call it a Day in 1935. Her most successful play, its initial West End run lasted for 509 performances. The original cast included Owen Nares and Fay Compton. The play was produced by the impresario Basil Dean. In 1936 it transferred to Broadway, where it ran for 194 performances at  the Morosco.

There is also a 2019 television series, Call it a Day.