“Melted into thin air” refers to something that has completely disappeared, so completely that it is as if it has become part of the air around us, and has not left a trace. “Melting” is, therefore, an appropriate word to describe that. It is more usual to say that something has “vanished” into thin air, however, and “disappeared” into thin air is also widely used.

Origin of melted into thin air

The image of something melting or vanishing into thin air comes from two Shakespeare plays. Shakespeare does not use either of the two terms in exactly the same way as the idioms we use today, however. In Othello the phrase appears as:

“Then put up your pipes in your bag, for I’ll away. Go; vanish into air; away!”

“These our actors, as I foretold you, were all spirits and are melted into air, into thin air.”

The introduction of “melting” is also there. The idiom as it is used today has deleted “into air,” leaving “melted into thin air,” which has become embedded as an idiom in the English language.

The word “melted” was replaced by “vanish” in an article in The Edinburgh Advertiser in April 1822 to create the interchangeable phrase “Vanish into thin air”:

“The latest communications make these visions vanish into thin air.” 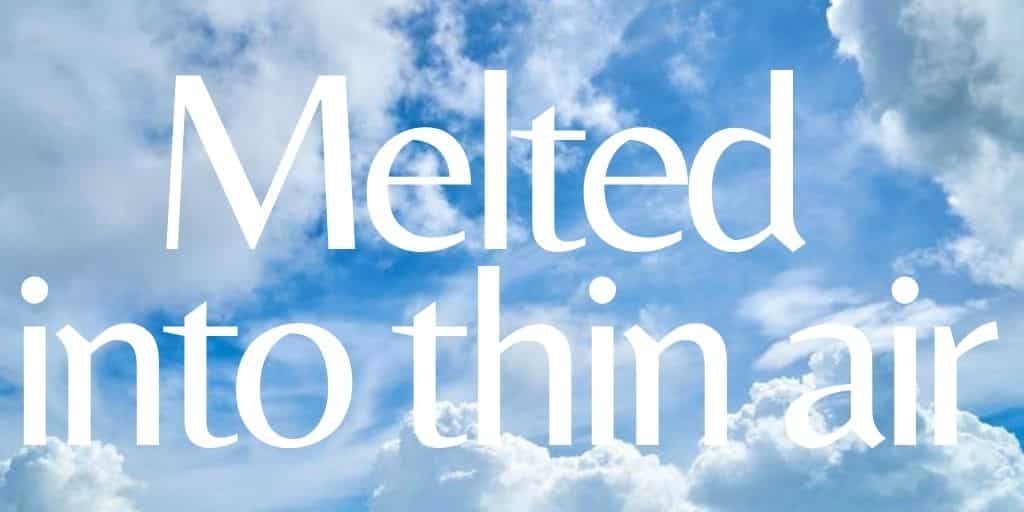 Shakespeare and the use of ‘thin air’

As usual with Shakespeare, he finds a word or phrase that is so right or perfect for the thing it is describing that it gets swept up into the language, where it stays forever.

The term “thin air” contains within it something very delicate – almost the same as nothingness. And so, to say that something has disappeared into thin air the image of something becoming as nothing, as invisible as the air around us, is a very vivid one.

And then, if you add “melted,” you actually create the visual image of something in the process of disappearing, melting, as ice does in water, until it has completely disappeared and become part of the water. And so, when the magician, Prospero, creates a stageful of actors, acrobats, dancers and musicians, and then, makes them vanish as though they had never been there Shakespeare creates the perfect phrase to express that: they “are melted into air, into thin air.”

Shakespeare’s invented term, “thin air” has also come to mean ‘from an unknown source or place’ – for example, “He’s always lying: he makes up things out of thin air,” or “she was a spinster, and suddenly a husband appeared out of thin air.”

Into, or out of, thin air also means something mysterious or sudden. “The magician is amazing: he stretches his hand out and takes an egg out of thin air.”

The term “out of the blue” is often used as a synonym for “out of thin air.” It is not exactly the same, however: one can talk about something appearing out of or disappearing into thin air, but we don’t say that something has disappeared into the blue. So, although there is some coincidence of the two terms, they are not exact synonyms.