What does ‘riddance mean?’

‘Riddance’ is an obsolete word, but in Early Modern English it was a regular and useful word, meaning deliverance from something or getting rid of something.

If the word were still in use we would be talking about throwing out the garbage as a riddance or selling our old car as a riddance, but we don’t ever use it now, except in the idiom ‘good riddance.’ In the 16th century saying goodbye to someone was often a ‘happy,’ ‘fayre’ or ‘gladsome’ riddance. In Shakespeare’s Merchant of Venice Portia says goodbye to the Prince of Morocco by wising him ‘a gentle riddance.’

How is ‘good riddance’ used today?

We see the phrase ‘good riddance’ as we use it today, as a comment about someone we are happy to see the end of. In Shakespeare’s play, Troilus and Cressida Thersites, the disreputable, foul-mouthed servant to the Greek officers insults them, saying

‘I will see you hanged like clotpoles, ere I come any more to your tents. I will keep where there is wit stirring and leave the faction of fools.’

He leaves and Patroclus comments ‘a good riddance.’

The first written appearance of the phrase ‘good riddance’

Decades before Troilus and Cressida was written Queen Elizabeth’s chancellor, Lord Burghley, used the term ‘good riddance’ in the way we use it, in a letter to his son, Robert Cecil. This is the first known usage of the term in writing. 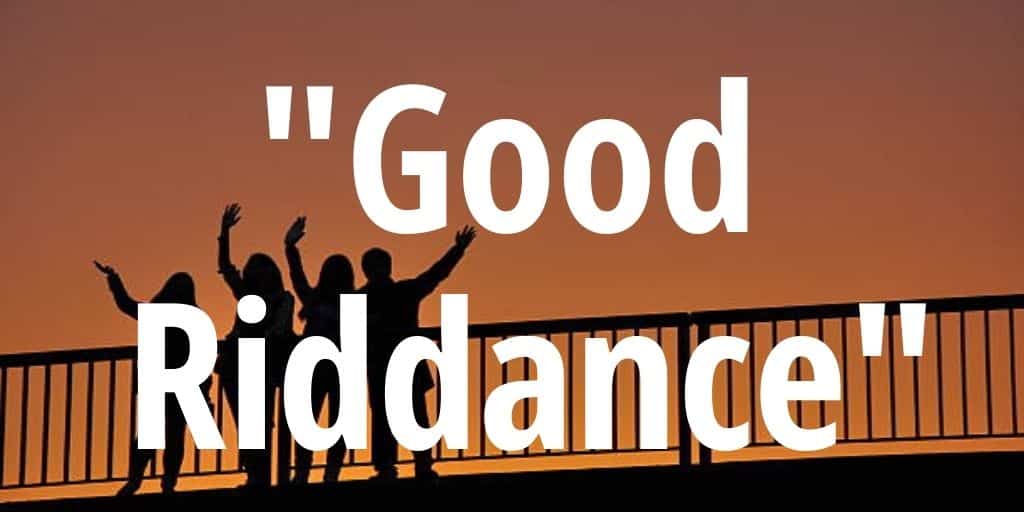 The addition of ‘bad rubbish’ to the term originates with the influential Scottish novelist, Tobias Smollett. In a literary obituary of a writer named Mr Pratt in 1805, Smollett wrote:

‘We should look upon this author’s departure from the world of literature as a good riddance of bad rubbish.’

Riddance OF bad rubbish’ became riddance TO bad rubbish in 1841 when American journalist Francis Preston Blair wrote ‘we are disposed to exclaim ‘Good riddance to bad rubbish,’ and the idiom was thereby made complete and is still used in that form today.