‘Forever And A Day’, Meaning & Context

The phrase ‘forever and a day’ has no logical meaning at all, but it has become an idiom, and as such, it means ‘a very long time.’ It’s a construct known as dramatic emphasis. It’s like the title of the Beatle’s song, “Eight days a week,” which is similar in meaning to “forever and a day.” It also has no logical meaning, but is now an idiom used to express something that never ends.

Origin of ‘Forever and a Day’

This is a Shakespeare invention. It isn’t just a phrase that Shakespeare casually used, that became an idiom, like “all that glisters (glitters) is not gold,” or “method in your madness”, both or which are perfectly logical in everyday English. “Forever and a day” is a clever invention deliberately constructed to mean a very long time. Shakespeare was obviously very pleased with it as, having used it in The Taming of the Shrew, he used it again in As You Like It.

In The Taming of the Shrew Lucentio’s servant Biondella manages his master’s affairs, including his love life. Here, he gives Lucentio some advice:

“I cannot tell; except they are busied about a counterfeit assurance: take you assurance of her, ‘privilegio ad imprimendum solum:’ to the church; take the priest, clerk, and some sufficient honest witnesses: If this be not that you look for, I have no more to say, But bid Bianca farewell for ever and a day.”

In As you like it Rosalind is talking to Orlando. Orlando says his love is “forever and a day.” Rosalind says that mans’ love may as well be for a day because they fall out of love just as quickly as they fall into love.

ROSALIND: Now tell me how long you would have her after you have possessed her.

ORLANDO: Forever and a day.

ROSALIND: Say “a day” without the “ever.” No, no, Orlando, men are April when they woo, December when they wed. Maids are May when they are maids, but the sky changes when they are wives. I will be more jealous of thee than a Barbary cock- pigeon over his hen, more clamorous than a parrot against rain, more newfangled than an ape, more giddy in my desires than a monkey. I will weep for nothing, like Diana in the fountain, and I will do that when you are disposed to be merry. I will laugh like a hyena, and that when thou art inclined to sleep. 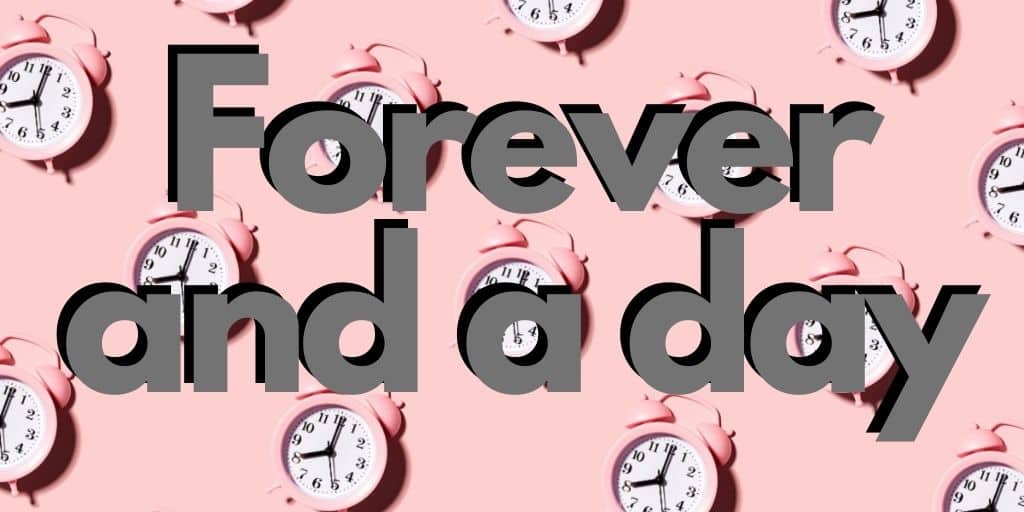 Shakespeare phrase – ‘Forever and a day’

‘Forever and a Day’ in Popular Culture

The idiom has inspired several writers, film makers and musicians as a title for their works.

Other Phrases Suggesting Time Without End