Looking for Cymbeline quotes? Read our selection of the very best quotes from Cymbeline along with speaker, act and scene. Classed as one of Shakespeare’s comedies, Cymbeline is set in Roman Britain and features the heroine Imogen, who exemplifies the themes of truth triumphing over flasehood. As always, Shakespeare brings the characters to life with powerful dialogue and some deep and meaningful quotes.

Read on below for the most significant Cymbeline quotes:

Lest the bargain should catch cold and starve.

Boldness be my friend:
Arm me audacity from head to foot!

How bravely thou becom’st thy bed!

Ambitions, covetings, change of prides, disdain,
Nice longing, slanders, mutability,
All faults that may be named, nay, that hell knows,
Why, hers, in part of all.

Is there no way for men to be, but women
Must be half-workers?

Our cage
We make a choir, as doth the prisoned bird,
And sing our bondage freely.

The game is up.

‘Tis slander,
Whose edge is sharper than the sword, whose tongue
Outvenoms all the worms of Nile, whose breath
Rides on the posting winds, and doth belie
All corners of the world.

I have not slept one wink.

I see a man’s life is a tedious one.

All gold and silver rather turn to dirt.

Play judge and executioner all himself.

Thersites’ body is as good as Ajax’s,
When neither are alive.

Fear no more the heat o’ the sun,
Nor the furious winter’s rages,
Thou thy worldly task hast done,
Home art gone, and ta’en thy wages.
Golden lads and girls all must,
As chimney-sweepers, come to dust.

Hang there like fruit, my soul,
Till the tree die.

Britain is
A world by itself, and we will nothing pay
For wearing our own noses.

O, for a horse with wings!

What should we speak of
When we are old as you? When we shall hear
The rain and wind beat dark December, how,
In this our pinching cave, shall we discourse
The freezing hours away?

To lapse in fullness
Is sorer than to lie for need, and falsehood
Is worse in kings than beggars.

Though mean and mighty, rotting
Together, have one dust, yet reverence
(That angel of the world) doth make distinction
Of place ‘tween high, and low.

Are we missing any great Cymbeline quotes? Let us know in the comments section below. 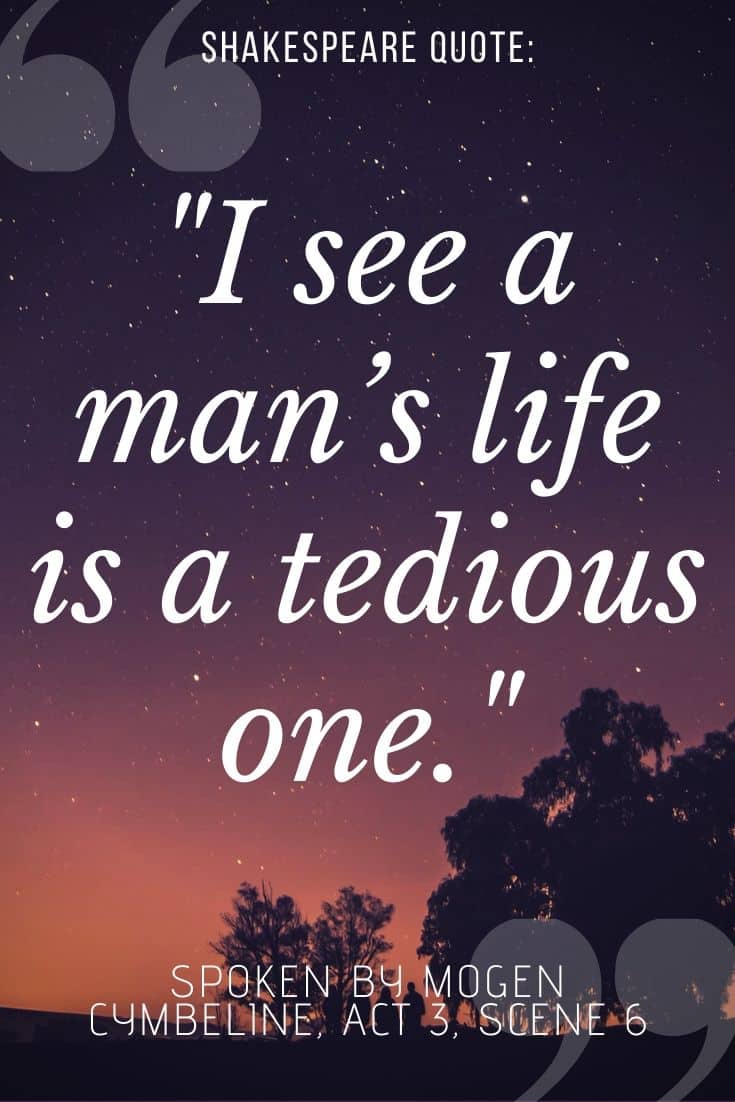