‘Now is the winter of our discontent’ soliloquy, spoken by Richard, Duke of Gloucester in Act 1, Scene 1:

Now is the winter of our discontent
Made glorious summer by this son of York;
And all the clouds that lour’d upon our house
In the deep bosom of the ocean buried.
Now are our brows bound with victorious wreaths,
Our bruised arms hung up for monuments,
Our stern alarums chang’d to merry meetings,
Our dreadful marches to delightful measures.
Grim-visaged war hath smooth’d his wrinkled front:
And now, instead of mounting barded steeds
To fright the souls of fearful adversaries,
He capers nimbly in a lady’s chamber,
To the lascivious pleasing of a lute.
But I, that am not shap’d for sportive tricks,
Nor made to court an amorous looking-glass;
I, that am rudely stamp’d, and want love’s majesty
To strut before a wanton ambling nymph;
I, that am curtail’d of this fair proportion,
Cheated of feature by dissembling Nature,
Deformed, unfinish’d, sent before my time
Into this breathing world, scarce half made up –
And that so lamely and unfashionable
That dogs bark at me, as I halt by them –
Why, I, in this weak piping time of peace,
Have no delight to pass away the time,
Unless to spy my shadow in the sun,
And descant on mine own deformity.
And therefore, since I cannot prove a lover,
To entertain these fair well-spoken days,
I am determined to prove a villain,
And hate the idle pleasures of these days.
Plots have I laid, inductions dangerous,
By drunken prophecies, libels and dreams,
To set my brother Clarence and the King
In deadly hate, the one against the other:
And if King Edward be as true and just
As I am subtle, false and treacherous,
This day should Clarence closely be mew’d up,
About a prophecy, which says that ‘G’
Of Edward’s heirs the murderer shall be –
Dive, thoughts, down to my soul: here Clarence comes.
Spoken by Richard (Act 1, Scene 1)

‘Was ever woman in this humour woo’d?’ soliloquy, spoken by Richard Duke of Gloucester in Act 1, Scene 2:

Was ever woman in this humour won?
I’ll have her, but I will not keep her long.
What? I, that kill’d her husband and his father,
To take her in her heart’s extremest hate,
With curses in her mouth, tears in her eyes,
The bleeding witness of my hatred by,
Having God, her conscience, and these bars against me,
And I no friends to back my suit at all
But the plain devil and dissembling looks?
And yet to win her! All the world to nothing!
Ha!
Hath she forgot already that brave prince,
Edward, her lord, whom I, some three months since,
Stabbed in my angry mood at Tewksbury?
A sweeter and a lovelier gentleman,
Fram’d in the prodigality of nature—
Young, valiant, wise, and (no doubt) right royal—
The spacious world cannot again afford.
And will she yet abase her eyes on me,
That cropp’d the golden prime of this sweet prince
And made her widow to a woeful bed?
On me, whose all not equals Edward’s moiety?
On me, that halts and am misshapen thus?
My dukedom to a beggarly denier,
I do mistake my person all this while!
Upon my life, she finds (although I cannot)
Myself to be a marvelous proper man.
I’ll be at charges for a looking-glass,
And entertain a score or two of tailors
To study fashions to adorn my body:
Since I am crept in favour with myself,
I will maintain it with some little cost.
But first I’ll turn yon fellow in his grave,
And then return lamenting to my love.
Shine out, fair sun, till I have bought a glass,
That I may see my shadow as I pass.

Any Richard III soliloquys we’re missing? Let us know in the comments section below! 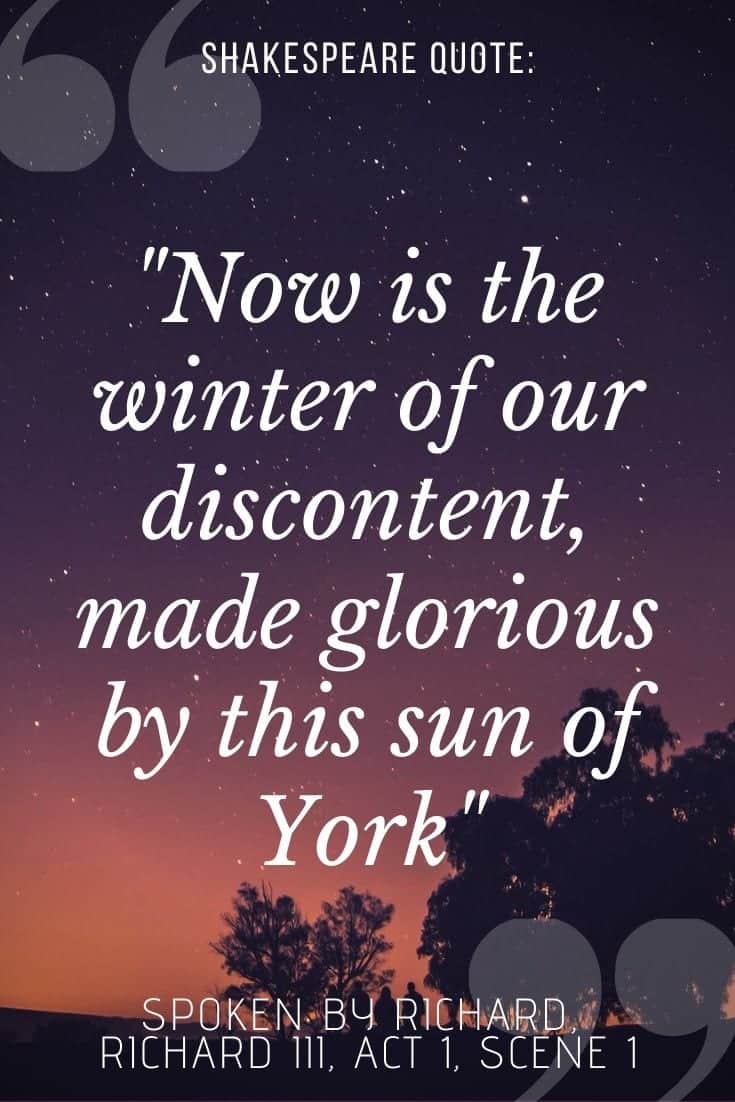