‘Frailty, thy name is woman’ is one of the most quoted lines from Shakespeare. It appears in Hamlet, and is taken from one of Shakespeare’s most famous soliloquys: ‘Oh that this too too solid flesh would melt.’

It is the first soliloquy in Hamlet, a play that is famous for its soliloquies.

Hamlet has returned to Denmark from his studies in Germany because his father has died and, intending to comfort his mother, he finds that she has married her husband’s younger brother Claudius. Apart from the fact that Hamlet has never liked and trusted Claudius, he is devastated that she has remarried,  to Claudius in particular, and so soon after her husband’s death.

The play opens with the suave, smooth, charismatic Claudius, now King of Denmark, addressing the court. He has somehow jumped in and taken the throne which should have been Hamlet’s. Hamlet’s mother, Gertrude, is seated beside him on the throne. Hamlet is dressed in black as he is in mourning for his father, and both his mother and Claudius implore him to lighten up and not take his mourning too far. When all the characters have left the room Hamlet shows the audience how he is feeling. He is very depressed,  and angry that his mother has married his uncle so soon after his father’s death. We now get the first insight into hamlet’s state of mind.

O, that this too too solid flesh would melt
Thaw and resolve itself into a dew!
Or that the Everlasting had not fix’d
His canon ‘gainst self-slaughter! O God! God!
How weary, stale, flat and unprofitable,
Seem to me all the uses of this world!
Fie on’t! ah fie! ’tis an unweeded garden,
That grows to seed; things rank and gross in nature
Possess it merely. That it should come to this!
But two months dead: nay, not so much, not two:
So excellent a king; that was, to this,
Hyperion to a satyr; so loving to my mother
That he might not beteem the winds of heaven
Visit her face too roughly. Heaven and earth!
Must I remember? why, she would hang on him,
As if increase of appetite had grown
By what it fed on: and yet, within a month–
Let me not think on’t–Frailty, thy name is woman!
A little month, or ere those shoes were old
With which she follow’d my poor father’s body,
Like Niobe, all tears:–why she, even she–
O, God! a beast, that wants discourse of reason,
Would have mourn’d longer–married with my uncle,
My father’s brother, but no more like my father
Than I to Hercules: within a month:
Ere yet the salt of most unrighteous tears
Had left the flushing in her galled eyes,
She married. O, most wicked speed, to post
With such dexterity to incestuous sheets!
It is not nor it cannot come to good:
But break, my heart; for I must hold my tongue. 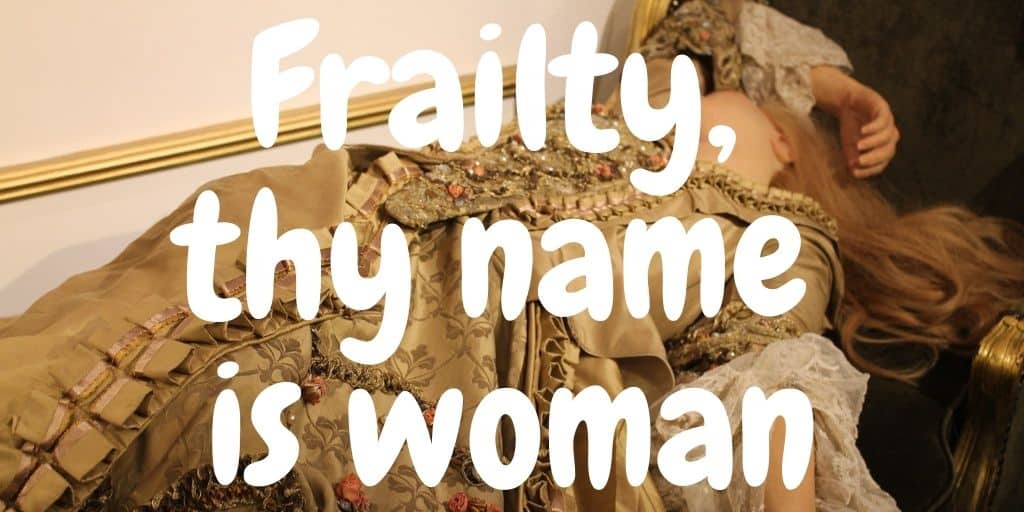 ‘Frailty. thy name is woman’

Who is the woman in ‘Frailty, thy name is woman’ quote?

When Hamlet says “woman,” he means Gertrude. He sees her as morally weak because she has betrayed her husband by marrying his brother, Claudius, just one month after her husband’s death.

When, referring to his mother, he says “frailty thy name is woman” he is foreshadowing his perception of Ophelia who appears to be on Claudius’ side, and is thus another betrayal by another woman. The two women closest to him have disappointed him. To his mind women represent frailty – they are weak, breakable and delicate in nature. Those characteristics are inherent in the character of women. He sees their actions as betrayal due to their fragility and watches both die as a result of their own misjudgments.

In the years before the death of his father Hamlet was in a relationship with Ophelia but now, after the shock of his mother’s remarriage and his assessment of her character, and the character of all women, as frail, he is not only cold towards her but actually cruel. He shouts at her, curses at her, raises his arm as though he is going to hit her, and makes her cry. She is under extreme pressure as all the men in her life are abusing her: her father, Polonius, threatens her and dictates to her, and he and Claudius use her to spy on Hamlet. And now Hamlet, who has always been loving and tender towards her, is behaving violently. All that drives her to suicide.

The play, Hamlet, probably deals with more issues than any of Shakespeare’s other plays do, and here, in this soliloquy, and this one sentence, Hamlet is introducing several of those issues. Anger, family, gender and misogyny are tightly woven into the text of this play.