‘Love is blind’ is a phrase spoken by Jessica, a character in The Merchant of Venice.

Today the phrase ‘love is blind’ is one of the most common comments people make about what people who are in love do, and how they behave. It’s what friends say in response to such things as the apparent incompatibility between couples; the silly behaviour of someone as a result of being in love; of not being practical about the consequences of the things they do because they’re in love, and all sorts of things that people do because of that overwrought condition.

Shakespeare put all that together in the simple statement ‘love is blind.’ The idea itself comes from long before Shakespeare’s time, from one of the images of Cupid (a winged Roman god of love) in which he wears a blindfold. 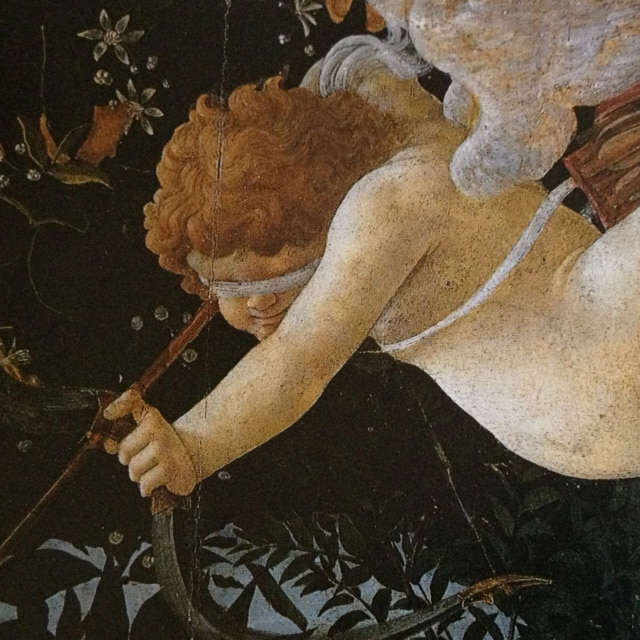 Cupid painted blindfolded to signify that ‘love is blind’

We often think of Cupid as blind, even though that is only one of the versions of him. He appears in many different forms – as a baby, a child, and a teenager, not always wearing the blindfold. He sometimes carries a bow and has a quiver of arrows on his back. That has given rise to the tradition of his being able to make people fall in love by shooting them with one of his arrows. If an arrow strikes you that’s it: you immediately fall in love. He doesn’t shoot you deliberately, as he can’t see you: anyone can suddenly, out of the blue, be wounded by one of Cupid’s arrows. There is no sense or reason in it because ‘love is blind.’

In The Merchant of Venice, the Jew, Shylock’s daughter, Jessica, elopes with a Christian. He arrives at Shylock’s house on a Venetian canal in a boat and, disguised as a boy – his torchbearer – Jessica climbs out the window to join him in the boat. Joining her lover, she would prefer to look her best and is self-conscious about having to conceal her feminine charms, but she’s relieved that it’s dark and, anyway, he is in love with her and, because love is blind, he won’t mind that she looks like a boy. These are the words she says to her lover as she climbs out of the window:

I am glad ’tis night, you do not look on me,
For I am much ashamed of my exchange.
But love is blind, and lovers cannot see
The pretty follies that themselves commit,
For if they could Cupid himself would blush
To see me thus transformed to a boy.

Shakespeare continues to pursue this idea in A Midsummer Night’s Dream, where the play is mostly about being in love. One of the fairies who inhabit the wood, Puck, intervenes in the complex relationships among the four lovers by treating them with a love potion, which results in irrational emotions among them. For a period of time, before he then straightens things out, being affected by his actions, they fall in and out of love with each other without any reason.

In that sense Puck is a Cupid surrogate, going around causing havoc among characters who have no control over who they are in love with, blindly loving someone for no reason at all. He also administers the love potion to Titania, the fairy queen, who falls in love with a donkey, unable to see that he is gross and ridiculous. This surely is Shakespeare’s strongest statement that love is truly blind!

Read our pick of the top 50 Shakespeare quotes about love.