Macbeth is a dark play – not only dark in the metaphorical sense but also in that most of it is set at night-time, and when there are daytime scenes they are obscured by mist and bad weather. There are several scenes in which the characters are in total darkness, and just step into a spot of half-light to speak one of the many soliloquies that there are in the play.

In this soliloquy Macbeth articulates his disappointment. After the ardent pursuit of his ambition to become king he arrives at a conclusion – life has become a burden, tedious and heading for only one destination: death. He sees, almost for the first time, that life is very short, like a candle, and that all the passion we may feel for anything, including a burning compulsion to occupy the throne, is just a lot of meaningless noise.

We become very passionate in the pursuit of the things we want out of life and then we die. It’s like actors in the theatre, artificially living out the lives of human beings on the stage, with all their passion and then, when the curtain comes down, they just go home and think nothing about their character’s anguish. That character, with all his or her ambition, desire, obsessions, lies dead as the actor just goes home and has supper.

The candle represents human life. Macbeth calls it a brief candle, meaning a short candle that only burns briefly. It burns down and the flame goes out. And then it is completely dark. Life is really very short and in the context of that great darkness around it, it is inconsequential. The burning ambition to become king is meaningless in the context of that vast stretch of black night beyond human life. (Read more Macbeth ambition quotes.)

And so, as Macbeth reflects on what he has done and the emptiness it has brought him, he finds himself trapped, with nowhere to go. Apart from the grave.

On another level, as a piece of poetry, this short soliloquy is just about the best we get from the best English poet. Let’s look at it:

To-morrow, and to-morrow, and to-morrow,
Creeps in this petty pace from day to day,
To the last syllable of recorded time;
And all our yesterdays have lighted fools
The way to dusty death. Out, out, brief candle!
Life’s but a walking shadow, a poor player
That struts and frets his hour upon the stage
And then is heard no more.”

We have considered the character, Macbeth, and his state of disillusionment, just wanting what’s left of the almost burnt down candle that is his life, to be snuffed out.

As a piece of poetry this is the very best there is. The poet is portraying a character whose mind is chaotic. He seems to be darting from one idea to another, and none of it making sense. But Shakespeare is concerned with making meaning with words – meaning that goes beyond the dramatic dimension. In this passage he develops a poetical logic that can’t be matched almost anywhere else in English poetry.

The soliloquy is the presentation of thought through a series of vivid images. What makes this small piece of poetry so special is the poetic logic that is developed through the images. Each image is presented and no sooner than it appears it gives way to another image that is born from it, and that process continues all the way through.

The soliloquy is a sigh of hopelessness by a man for whom life has ceased to have meaning.  He starts with a statement of the futility of life, and of time itself, with images of time – tomorrow, yesterday, day, recorded time – using a rhythm that stretches time out, making it creep.

Those images give birth to one of a person using a light to guide them. The daylight has the sole function of guiding us to the darkness of the grave. The light has come naturally from the images of time, particularly the word ‘day’.  When we die that light is extinguished, like a candle, which is the next image, born out of the previous one of someone carrying a light. A candle’s light is brief, like life, unlike the period of the night to come – the state of death, which is eternal. Candles cast shadows, which gives rise to the next image, life as a walking shadow. ‘Shadow’ is a term Elizabethans used for actors, and here we see an actor on a stage.

Actors play out the dramas and anguish of human beings. They strut and fret, and express great passion, but that only lasts for the duration of the performance, and then they go home and you don’t hear from them again. The passion is just an act and lasts for a very short time. All that is a representation of life, which is full of empty passion that is just the raving of an idiot, the final image, arising from the meaningless passion of the actor: it doesn’t last and it’s hollow.

So when Macbeth cries ‘out, out, brief candle’ he is summing up everything he has ever done, assessing his life, judging it as futile, and just wanting it to end. 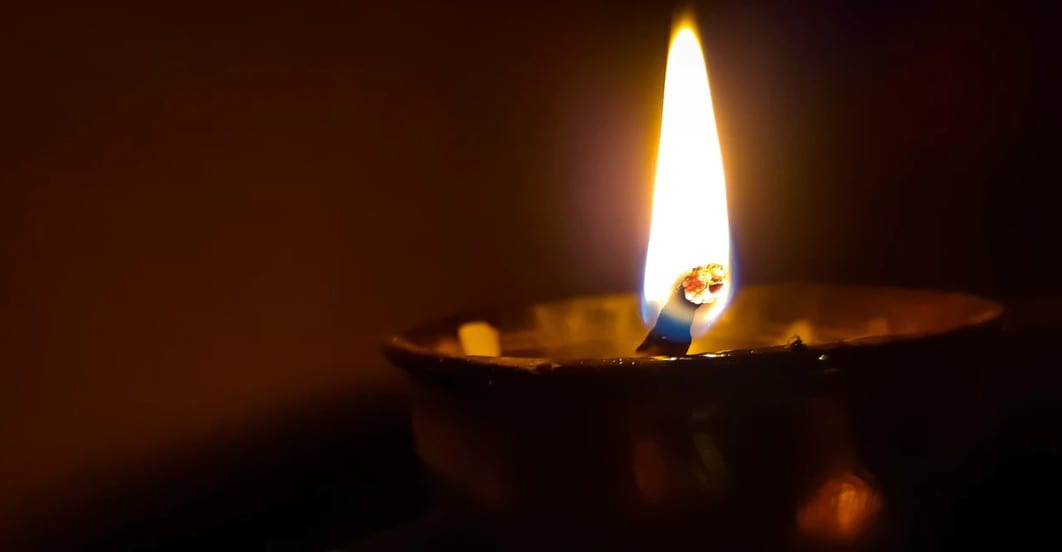