Looking for King John quotes? Read our selection of the very best quotes from King John, along with speaker, act and scene. Shakespeare’s King John deals with social upheaval, war and family feuding. and has a number of wise characters that provide memorable quotes.

Read on below for the most well known and significant King John quotes:

And if his name be George, I’ll call him Peter;
For new-made honour doth forget men’s names.

To deliver,
Sweet, sweet, sweet poison for the age’s tooth.

For courage mounteth with occasion.

I would that I were low laid in my grave:
I am not worth this coil that’s made for me.

Saint George, that swinged the dragon and e’er since
Sits on his horse back at mine hostess’ door.

That smooth-faced gentleman, tickling Commodity,
Commodity, the bias of the world.

He is the half part of a blessed man,
Left to be finished by such as she;
And she a fair divided excellence,
Whose fulness of perfection lies in him.

Talks as familiarly of roaring lions
As maids of thirteen do of puppy-dogs!

I will instruct my sorrows to be proud,
For grief is proud and makes his owner stoop.

Here I and sorrows sit;
Here is my throne, bid kings come bow to it.

Life is as tedious as a twice-told tale,
Vexing the dull ear of a drowsy man;

Bell, book, and candle shall not drive me back,
When gold and silver becks me to come on.

Grief fills the room up of my absent child,
Lies in his bed, walks up and down with me,
Puts on his pretty looks, repeats his words,
Remembers me of all his gracious parts,
Stuffs out his vacant garments with his form:
Then have I reason to be fond of grief

When Fortune means to men most good,
She looks upon them with a threatening eye.

Will you put out mine eyes?
These eyes that never did nor never shall
So much as frown on you?

To gild refined gold, to paint the lily,
To throw a perfume on the violet,
To smooth the ice, or add another hue
Unto the rainbow, or with taper light
To seek the beauteous eye of heaven to garnish,
Is wasteful and ridiculous excess.

The spirit of the time shall teach me speed.

How oft the sight of means to do ill deeds
Makes deeds ill done!

Heaven take my soul, and England keep my bones!

Be great in act as you have been in thought

‘T is strange that death should sing.
I am the cygnet to this pale faint swan,
Who chants a doleful hymn to his own death,
And from the organ-pipe of frailty sings
His soul and body to their lasting rest.

There is so hot a summer in my bosom,
That all my bowels crumble up to dust:
I am a scribbled form, drawn with a pen
Upon a parchment, and against this fire

Come the three corners of the world in arms,
And we shall shock them. Nought shall make us rue,
If England to itself do rest but true.

I do not ask you much,
I beg cold comfort

This England never did, nor never shall,
Lie at the proud foot of a conqueror,
But when it first did help to wound itself.
Now these her princes are come home again,
Come the three corners of the world in arms,
And we shall shock them. Nought shall make us rue,
If England to itself do rest but true.

Are we missing any great All’s Well That Ends Well quotes? Let us know in the comments section below. 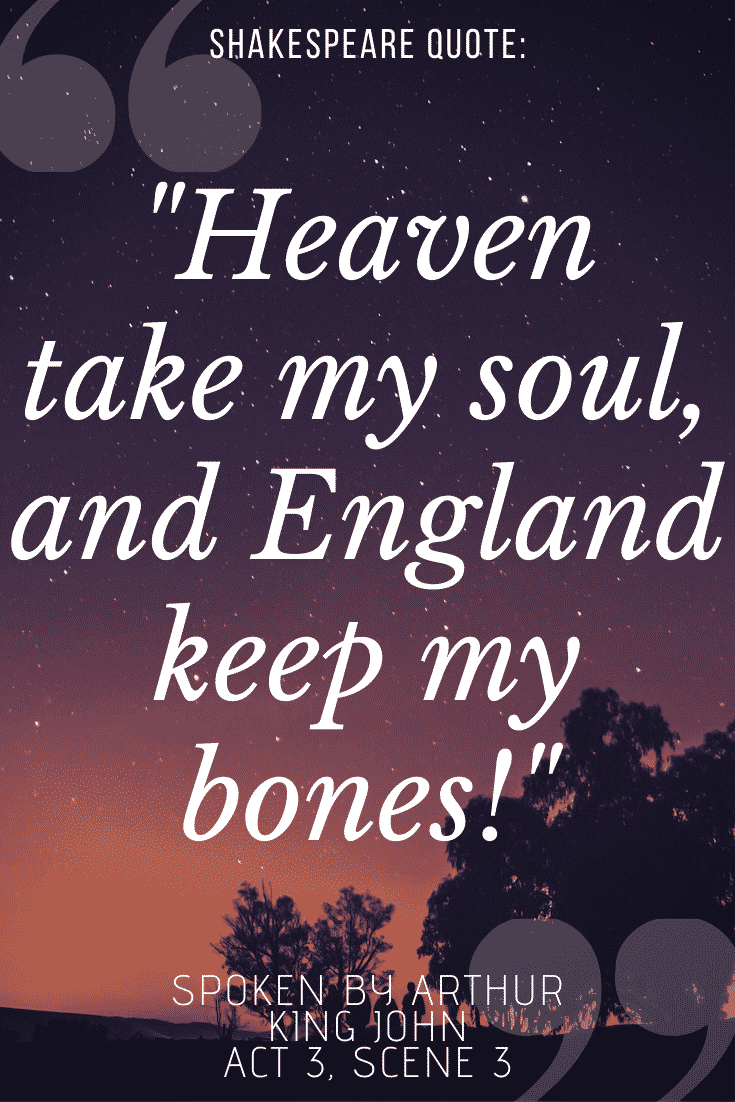