Looking for The Two Noble Kinsmen quotes? Read our selection of the very best quotes from The Two Noble Kinsmen, along with speaker, act and scene. Shakespeare collaborated with John Fletcher on this play, which is strongly based on Chaucer’s The Knight’s Tale. As with so many of his plays Shakespeare brings the characters to life with some memorable dialogue and stand-out quotes.

Read on below for the most well known and significant The Two Noble Kinsmen quotes:

I have heard the fortunes
Of your dead lords, which gives me such lamenting
As wakes my vengeance and revenge for ’em.

Our services stand now for Thebes, not Creon.
Yet to be neutral to him were dishonor,
Rebellious to oppose.

The true love ‘tween maid and maid may be
More than in sex individual.

Th’ impartial gods, who from the mounted heavens
View us their mortal herd, behold who err
And, in their time, chastise.

This world’s a city full of straying streets,
And death’s the market-place where each one meets.

This world’s a city full of straying streets,
And death’s the market-place where each one meets.

Whilst Palamon is with me, let me perish
If I think this our prison!

Never till now I was in prison, Arcite.

I saw her first.

It is the very emblem of a maid.
For when the west wind courts her gently,
How modestly she blows and paints the sun
With her chaste blushes. When the north comes near her,
Rude and impatient, then, like chastity,
She locks her beauties in her bud again,
And leaves him to base briars.

Once he kissed me.
I loved my lips the better ten days after:
Would he would do so every day!

I love him beyond love and beyond reason
Or wit or safety. I have made him know it;
I care not, I am desperate.

O you heavens, dares any
So nobly bear a guilty business? None
But only Arcite: therefore none but Arcite
In this kind is so bold.

This hand shall never more come near thee with such friendship.

What a mere child is Fancy,
That, having two fair gauds of equal sweetness,
Cannot distinguish, but must cry for both.

‘Tis pity love should be so tyrannous.

It is a falsehood she is in, which is with falsehoods to be combated.

O great corrector of enormous times,
Of dusty and old titles, that heal’st with blood
The earth when it is sick, and cur’st the world
O’th’pleurisy of people.

Never Fortune
Did pay a subtler game. The conquered triumphs;
The victor has the loss; yet in the passage
The gods have been most equal.

Are we missing any great The Two Noble Kinsmen quotes? Let us know in the comments section below. 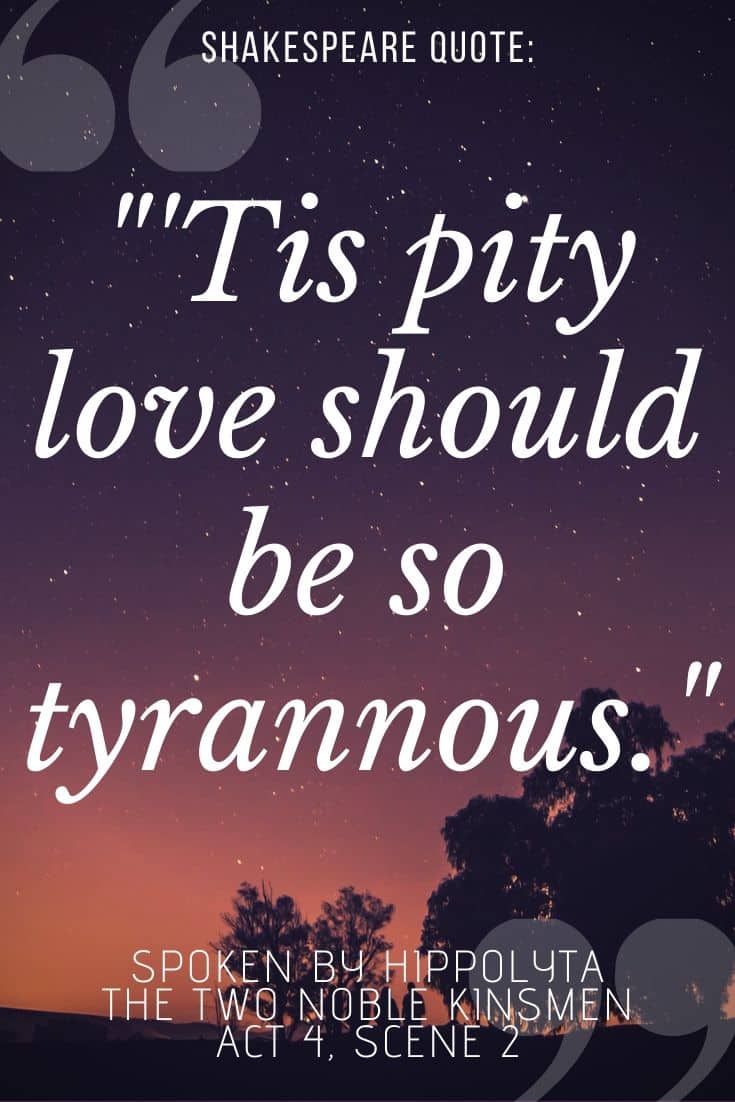