Meaning of “hit the sack”

This is an idiom that doesn’t have anything to do with a sack in its modern usage. It simply means to go to bed.

The idiom has nothing to do with Shakespeare, although Shakespeare uses the word “sack” several times in his plays. Sack is what Elizabethans called sherry because sherry was imported from Jerez de la Frontera in Andalusia, Spain, in bottles with little sacks around them. Upmarket bottles of sherry still come in those sacks. But “hit the sack” does not mean “hit the sherry” (which would make sense if it did!)

Origin on the phrase “hit the sack”

Linen was once the common material for bed sheets. It wasn’t the kind of linen we use on our beds today – the sheets were cut and sewn from storage bags, like the burlap and hessian bags we use for grains, rice, etc. today. That kind of linen was used for bed linen/sheets, pillow slips and blankets etc.

The term “sack” as in the forcible attack on a town or city or fortress comes from the same root. The French word “sac” is translated as sack or bag in English – ruthlessly stripping and stealing with force. That goes back to the sack, or bedding linen, which married couples ruthlessly struggle over – the age old marital tug of war, over who takes too much of the bed covers and leaves the other party cold and bare, like a plundered village, shivering in the cold winter night. Unbelievably, that where the use of the word sack, to destroy a town or village, comes from.

The term “hit the sack” was already an idiom before 1880. 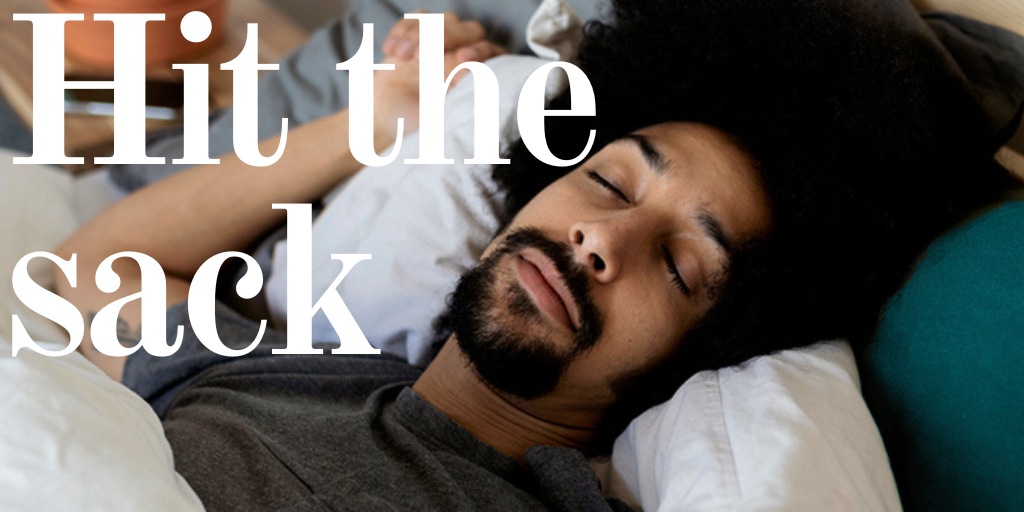 Hit the sack (not the sherry!)

Other going to bed idioms

There are many ways to talk about sleep. For example, someone who is asleep is “dozing,” “snoozing” or “getting some shut-eye.”

If you’re very tired, you can say that you’re “whooped” or “beat.” For example, “I’m whooped, so I’m going to hit the sack early tonight.”

If you fall asleep quickly, you can “crash” or “pass out.”

Someone in a deep sleep – that is, one that’s difficult to wake up from – is “fast asleep” or “sound asleep.”

To “not sleep a wink” means to not sleep at all; and if you had a hard time falling asleep, you can say that you “tossed and turned.” This means that you were moving around in bed, trying to fall asleep. For example, “I was tossing and turning all night. I didn’t sleep a wink!”

But if you sleep very well without waking up during the night, you can say you “slept like a baby.”

Other words you can use for going to bed or sleeping