Looking for Othello quotes? Othello remains one of Shakespeare’s most enduring plays, full of memorable quotes from start to finish. As ever, Shakespeare brings new words and phrases into common usage – from describing jealousy as a “green-eyed monster” to having Iagio say that he will wear his heart upon his sleeve.

Read our selection of the very best quotes from Othello below, spoken by a variety of primary and secondary characters in the play. Along with each Othello quote the character speaking is listed, along with act and scene.

But I will wear my heart upon my sleeve
For daws to peck at: I am not what I am.

I follow to serve my turn upon him:
We cannot all be masters, nor all masters
Cannot be truly follow’d

She wished she had not heard it, yet she wished
That heaven had made her such a man.

Our bodies are our gardens, to the which our wills are gardeners.

Put money in thy purse.

To mourn a mischief that is past and gone is the next way to draw new mischief on.

If after every tempest come such calms,
May the winds blow till they have wakened death!

I am not merry; but I do beguil
The thing I am, by seeming otherwise.

Reputation is an idle and most false imposition, oft got without merit and lost without deserving

O, beware, my lord, of jealousy:
It is the green-eyed monster which doth mock
The meat it feeds on.

O, now, for ever
Farewell the tranquil mind; farewell content.

‘Tis not a year or two shows us a man:
They are all but stomachs, and we all but food:
They eat us hungerly, and when they are full
They belch us.

T’is neither here nor there

It makes us or it mars us.

Yet I’ll not shed her blood,
Nor scar that whiter skin of hers than snow,
And smooth as monumental alabaster.

Let heaven and men and devils, let them all,
All, all, cry shame against me, yet I’ll speak.

I kissed thee ere I killed thee: no way but this,
Killing myself, to die upon a kiss.

Are we missing any great Othello quotes? Let us know in the comments section below. 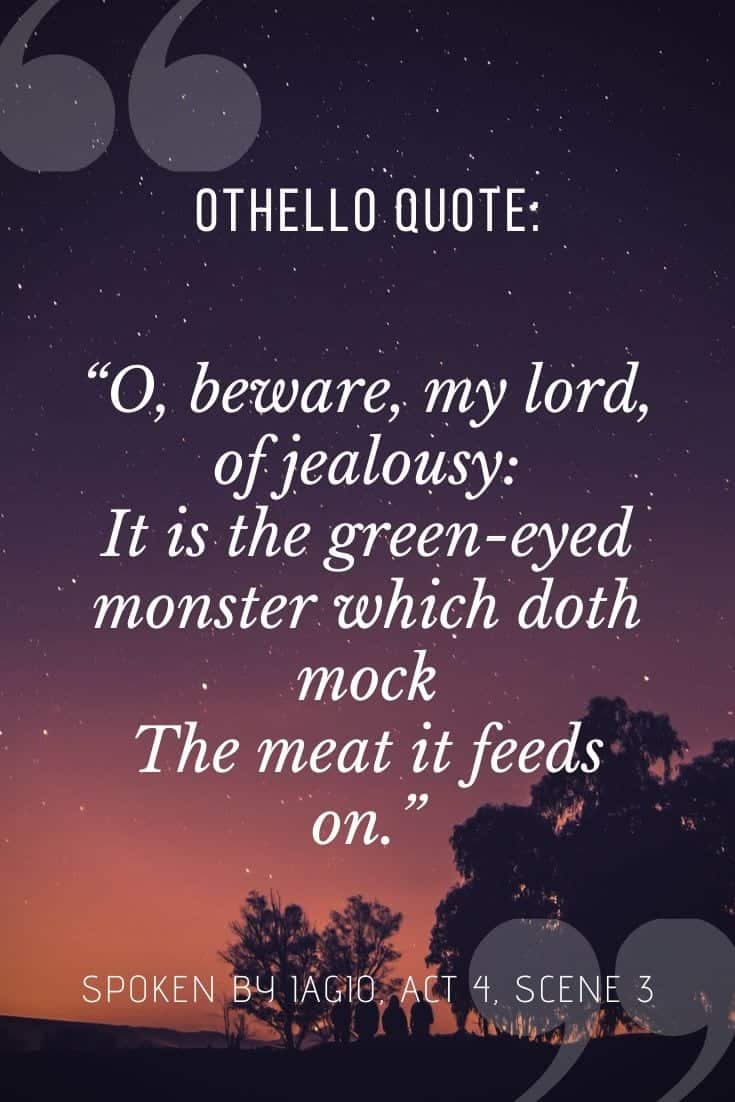