‘Apple Of My Eye’, Meaning & Context

‘The apple of my eye’ is an idiom that Shakespeare used in his A Midsummer Night’s Dream play. However, Shakespeare was using this phrase literally (simply referring to the pupil of an eye), rather than the figurative way it is used today.

Meaning of ‘the apple of my eye’:

It is in the Bible that phrase ‘apple of my eye’ is first used figuratively. The apple of the eye was a favourite idiom of the Old Testament writers to indicate something, and particularly a person, that one values above all other things.

The phrase comes from a Hebrew expression that literally means ‘little man of the eye.’ It refers to the tiny reflection of yourself that you can see in other people’s pupils. To be the apple of someone’s eye clearly means that you are being focused on and watched closely by that person. Your very image is central in the eyes of that person!

This biblical meaning of ‘the apple of your eye’ comes to us quite independently of Shakespeare’s use of the term. They are two completely different usages of the phrase. The phrase can be found in several Old Testament books of the King James Bible:

Biblical usage of ‘the apple of my eye’:

‘He found him in a desert land, and in the waste howling wilderness; he led him about, he instructed him, he kept him as the apple of his eye’

‘Keep me as the apple of the eye, hide me under the shadow of thy wings.’

Psalm 17:8. In this one,  when the psalmist (David)  asks God to keep him as the apple of His eye he is asking God to keep an eye on him and not lose sight of him. David was asking God to regard him as one would a cherished child, the object of great affection.

‘Keep my commandments, and live; and my law as the apple of thine eye.’

‘Their heart cried unto the Lord, O wall of the daughter of Zion, let tears run down like a river day and night: give thyself  no rest; let not the apple of thine eye cease.’

‘For thus saith the Lord of hosts; After the glory hath he sent me unto the nations which spoiled you: for he that toucheth you toucheth the apple of his eye.’

The idiom is very much alive in our everyday speech today and widely used among English speaking countries and instantly understood by everyone. 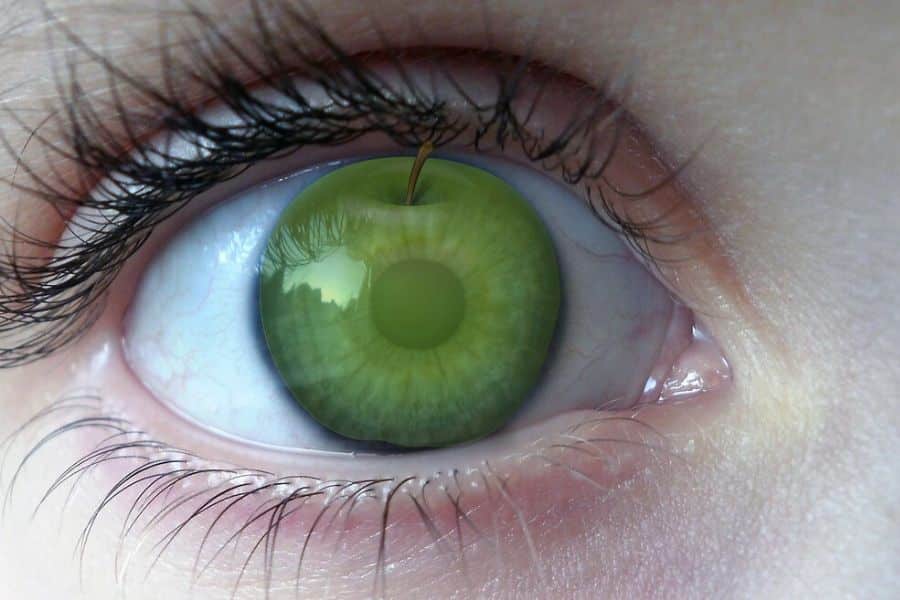 The apple of my eye

Shakespeare’s use of ‘the apple of his eye’

Shakespeare uses the term ‘the apple of his eye’ but not in the idiomatic sense that the Old Testament writers did.

Shakespeare used the phrase only once – in A Midsummer Night’s Dream. The fairy king, Oberon, instructs his servant, the fairy, Puck, to drop a love potion in Demetrius’ eye:

‘Flower of this purple dye,
Hit with Cupid’s archery,
Sink in apple of his eye’.

Shakespeare is using ‘apple of his eye’ quite literally here. The original meaning of the eye’s apple was purely anatomical. It derives from the fact that there was no scientific word to describe the pupil of the eye. In Shakespeare’s time they referred to the pupil as the ‘apple of the eye,’ as it was round and solid and resembled an apple. The term ‘pupil’ as we use it today, came much later.