When the audience at the Globe Theatre was all ready and settled to watch Master Shakespeare’s new play, Romeo and Juliet, the stage manager came out and delivered the following sonnet as a prologue:

Two households, both alike in dignity,
In fair Verona (where we lay our scene),
From ancient grudge break to new mutiny,
Where civil blood makes civil hands unclean.
From forth the fatal loins of these two foes
A pair of star-crossed lovers take their life;
Whose misadventured piteous overthrows
Doth with their death bury their parents’ strife.
The fearful passage of their death-marked love,
And the continuance of their parents’ rage,
Which but their children’s end nought could remove,
Is now the two hours’ traffic of our stage;
The which if you with patient ears attend,
What here shall miss, our toil shall strive to mend.

In speaking this sonnet before the play started he was telling the audience the whole plot of Romeo and Juliet. What an Elizabethan audience would most have latched on to was that the protagonists were ‘star-crossed lovers’ and the audience knew then that they were in for a good time, watching a series of disasters brought about by preordained bad luck. That the lovers’ stars crossed meant that the tragedy was inevitable because, as they saw it, the stars controlled human destiny.

It’s called ‘astrology.’ It was medieaval science – not just a medieaval science but the medieaval science, a compulsory subject in schools and universities. Its claim was that everything in human life is controlled by the movement of the stars. It was very complicated and a very powerful influence still in Elizabethan life. Human beings who tried to defy their stars always failed because the power lay entirely with the stars. The educated members of the audiences would have studied astrology and the others would also have strong opinions on the effect of the stars on their lives.

And the audiences were not disappointed, as poor Romeo and Juliet experience one piece of bad luck after another. Fate hounds them and ends up killing them.

Right in the middle of the play Juliet’s cousin, Tybalt, inadvertently kills Romeo’s friend, Mercutio. Romeo is so incensed that he pursues Tybalt and they fight. Romeo kills Tybalt, and as the unfortunate young man lies dead, Romeo looks up at the heavens and cries, ‘O, I am fortune’s fool!’

Fools were the lowest members of royal courts, completely at the mercy of the king, or prince or duke, who was at the top, and could do anything he liked to the fool. So what Romeo is saying is that he is completely at the mercy of Fate. This is the first evidence of the star-crossed condition of the lovers, now married. Friar Laurence has just married them, but now these two deaths have ruined what may have turned out to be a better future for the couple.

The run of bad luck continues, with miscommunications and bad luck leading to the scene in Juliet’s tomb, where the final act of the stars occurs. Juliet is lying drugged on a bier, but because of misinformation Romeo thinks she’s dead. He kills himself. She then wakes up, sees that he’s dead, and kills herself.

Being star-crossed they didn’t have a chance. However, this would not be Shakespeare if it was that simple. Shakespeare was far more interested in the actions of people than that they should be chess pieces moved about by the stars.

In the first place, the lovers are very young. Juliet is fourteen and Romeo not much older. Juliet is in the care of a nurse, who is responsible for her education and well-being. The local clergyman, Friar Laurence, is responsible for the well-being of his parishioners. Both should have some wisdom and maturity but neither has. They both connive in the marriage of these two teenagers, knowing that any such thing would be strictly forbidden by their parents. That is clearly very foolish and unworthy of responsible adults. In one way of looking at the play one could say that they are responsible for the tragedy.

And again, Friar Laurence could have prevented Juliet’s death if it hadn’t been for his cowardice. When Juliet discovers Romeo’s body Friar Lawrence is with her. He hears the guard coming and says that he can’t afford to be found there. He urges her to go with him but she won’t, and he runs away without her. She then kills herself.

All the way through the play one could point to the decisions made by both Romeo and Juliet. In any one case a different decision would have led to a different outcome.

In the Prologue, Shakespeare sets up the idea that a preordained fate drives the action of these star crossed lovers, and then plays with it by having foolish decisions made throughout by the characters. All tragedies, including Shakespeare’s, come about as the result of tragic flaws in the character of the tragic protagonists and bad judgment on their part. There are no exceptions.

Perhaps Shakespeare was too sophisticated to go along with the established science of his time. 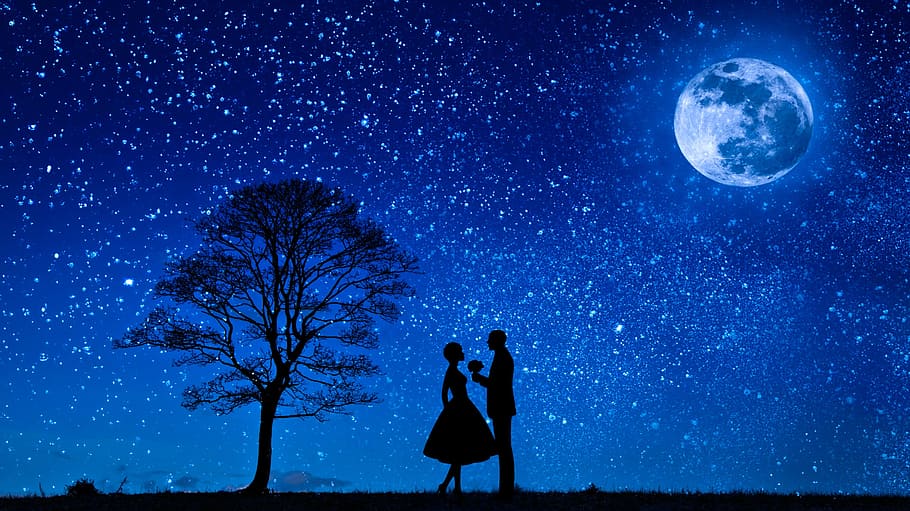 Star-crossed lovers in the moonlight