‘Neither Here Nor There’, Meaning & Context

Shakespeare uses the phrase ‘neither here nor there’ in Othello and it is generally assumed that it is one of the hundreds of the sayings that we use routinely today that were coined by him.

It is not always the case that all of Shakespeare’s most enduring phrases originated in his own thoughts, however. We have to try and get into the mind of Shakespeare, which is a ridiculous proposition, given that he was one of the top geniuses of any field in modern history. However, he was a voracious reader and his reading was deep and broad and incredibly varied in its subject matter. It ranged through history, ancient and medieval, science, geography, philosophy, literature, religion, and, in fact, every subject where someone had written something, and he was attracted by phrases that stood out for him.

It seems that, apart from finding exactly the most perfect wording for his own thoughts and ideas when creating dialogue for his plays and poems, Shakespeare also lifted phrases that he thought could not be better worded from his reading, and used them when he needed to say the same thing. ‘Neither here nor there’ was one such phrase, which he got while catching up on the latest developments in the fast-moving religious matters of his time.

But first, this is how it appears in Shakespeare, in Othello, written in 1604.

‘Neither here nor there’ in Othello

Saying ‘it’s neither here nor there,’ means the same today as it did in Othello. It means that something doesn’t matter because it’s not relevant.

In Act 4 scene 3 Emilia and Desdemona are discussing marriage. While talking about husbands and the concept of fidelity Desdemona, emotional at the thought of what she’s accused of, asks Emilia whether it is alright to cry. Amelia replies that it doesn’t matter one way or the other to her.

DESDEMONA
So, get thee gone; good night. Mine eyes do itch;
Doth that bode weeping?

EMILIA
‘Tis neither here nor there.

DESDEMONA
I have heard it said so. O, these men, these men!
Dost thou in conscience think,–tell me, Emilia,–
That there be women do abuse their husbands
In such gross kind?

EMILIA
There be some such, no question. 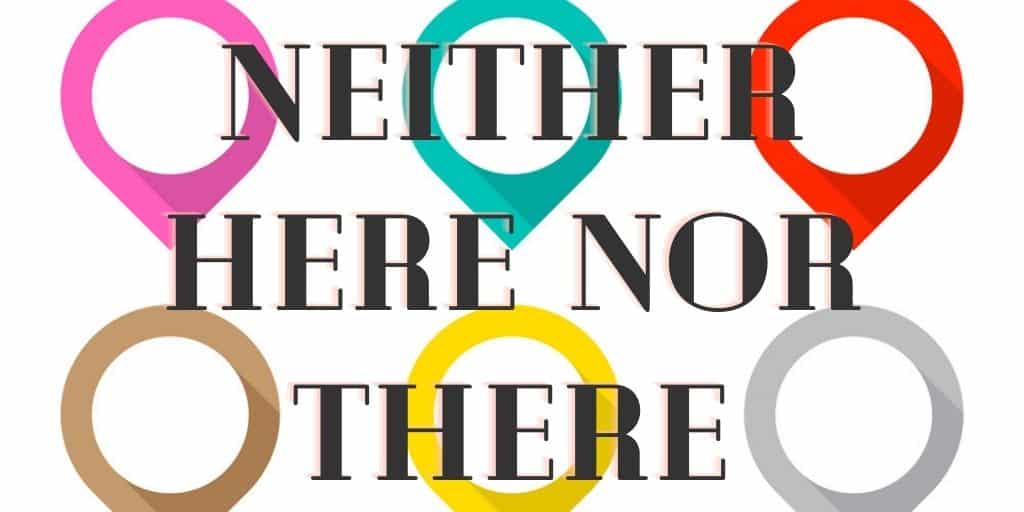 Neither here nor there, a common idiom

Origins of ‘Neither here nor there’ idiom

The phrase first appeared in Arthur Golding’s 1574 translation of a collection of sermons by John Calvin, The sermons of J. Calvin upon Deuteronomie :

“True it is that our so dooing is neither here nor there (as they say) in respect of God.”

This is Golding’s translation of Calvin’s 92nd sermon, on “the law of the tithe” as it’s called in Deuteronomy 14.24-29 — a passage which is about being “far” from the place where “God shall choose to set his name.” The sermon is about man’s (or woman’s) responsibility for taking charge of their affairs and not leave it all in the hands of God, as God has delegated them to His creation and has no preferences about how society organises itself. To God it is ‘neither here nor there.’

It is the first time the phrase appears in print. Shakespeare read that and presumably liked the turn of words, using it soon after he read it.