‘All That Glitters Is Not Gold’, Meaning

‘All that glitters is not gold’ is a saying that refers to a line in the Shakespeare play, The Merchant of Venice, read from a note in act 2, scene 7.

The phrase ‘All that glitters is not gold’ expresses in a beautiful metaphor, the idea that the things that seem most valuable on the surface – like gold – are often deceptive: that frequently, the more modest-looking things in life have the kind of substance that makes them more valuable.

‘All that glitters is not gold’ is an expression that can be dated back long ago to the 12th century. In 1175 French monk Alain de Lille wrote “Do not hold everything gold that shines like gold”, however, it was Shakespeare who coined the current version of the phrase and brought it into public consciousness.

Meaning of ‘All that glitters is not gold’

Using a substance like gold as an image of the thing that is most valuable in the material world, recognising its shiny appearance, and pointing out that there are other things that are also shiny, then concluding that because they are shiny doesn’t mean they are valuable, makes a universal statement about our values. We could so easily be taken in by shiny objects, both in the material sense and in more abstract areas like relationships. Often, the most modest appearances hide an inner ‘gold.’

‘All that glitters is not gold’ in context

The original line in the play is ‘all that glistens is not gold’, and some people use the word ‘glisters’. The modern idiom uses the word ‘glitters,’ which is a variance  of the early modern English word ‘glistens.’ (See our piece on misquoting Shakespeare.) The full quote reads:

O hell! what have we here?
A carrion Death, within whose empty eye
There is a written scroll! I’ll read the writing.
All that glistens is not gold;
Often have you heard that told:
Many a man his life hath sold
But my outside to behold:
Gilded tombs do worms enfold.
Had you been as wise as bold,
Young in limbs, in judgment old,
Your answer had not been inscroll’d:
Fare you well; your suit is cold.

This full ‘All that glitters is not gold’ quote requires some context and an explanation.

The beautiful, educated and highly accomplished young Portia has been left with a fortune on the death of her wealthy father. Concerned, before his death, that his daughter would be vulnerable to fortune hunters he stipulated in his will that all suitors would be subjected to a test. They would have to correctly pick one of three caskets that contains Portia’s picture, to claim her hand in marriage. One of the caskets is made of gold, one silver, and the last one is made of base lead.

Suitors line up to undergo the test. The first suitor (the Prince of Morocco) chooses the gold casket and opens it to find a skull with a rejection letter including this ‘all the glistens’ quote. His preference for gold has proved to be deceptive, and Portia’s comment as he leaves is ‘a gentle riddance’.

The second suitor chooses the silver casket and finds a puppet of a jester.

A poor young Venetian, who is poor and has to borrow money comes to Belmont to woo Portia. He chooses the lead casket and reveals her picture within. She returns to Venice with him to marry.

In ‘all that glitters is not gold,’ Shakespeare finds a perfect, beautiful image to express a profound truth, and as such has become one of his most recognised quotes. In this case, that love is not a matter of a superficial shiny object but is full of some more dreary things like responsibility and obligation. 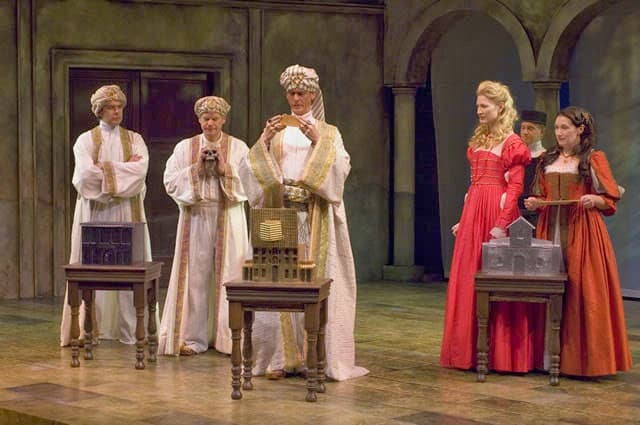 The Prince of Morocco reads the ‘all that glitters is not gold’ note from the gold casket.