The page includes 40 great Emily Dickinson quotes from her letters and poems.

America does not have a William Shakespeare. America does not have a Jane Austen. But America has Emily Dickinson. And like Jane Austen, a spinster living in a sedate community, she expressed in her poems and letters some of the most inspiring and beautiful observations about human life.  This selection of forty of her best observations is a mixture of quotes both from her many letters and her poems. Number one on the list is the beginning of her most famous poem and, indeed, it is one of the most famous of all American poems.

1. Because I could not stop for death
He kindly stopped for me
The carriage held but just ourselves
And immortality

Poem – Because I could not stop for death

2. Parting is all we know of heaven, and all we need of hell.

Poem – My life closed twice before it closed

Poem – Luck is not chance

5. After great pain, a formal feeling comes,
The nerves sit ceremonious, like tombs

6. My friends are my estate
I argue thee that love is life and life hath immortality

Poem – That I did always love

7. He ate and drank the precious words;
His spirit grew robust;
He knew no more that he was poor
Nor that his frame was dust.

Poem – He ate and drank the precious words

9. A wounded deer leaps the highest.

10. Tell the truth but tell it slant

Poem – Tell the truth but tell it slant

11. The brain is wider than the sky

Poem – The brain is wider than the sky

12. Forever is composed of nows.

Poem – Forever is composed of nows

13. Not knowing when the dawn will come
I open every door.

Poem – Not knowing when the dawn will come

14. I started early, took my dog,
And visited the sea;
The mermaids in the basement
Came out to look at me

15. Success is counted sweetest
By those who ne’er succeed

16. Hope is the thing with feathers
That perches in the soul,
And sings the tune without the words,
And never stops at all

Poem – Hope is the thing with feathers

17. Fame is a fickle food upon a shifting plate

Poem – Fame is a fickle food upon a shifting plate

Poem – While I was fearing it it came

19. The moon was but a chin of gold
A night or two ago,
And now she turns her perfect face
Upon the world below.

Poem – The moon was but a chin of gold

20. Earth is crammed with Heaven.

Poem – Earth is crammed with heaven

21. I measure every grief I meet
With narrow, probing, eyes –
I wonder if it weighs like mine –
Or has an Easier size.

Poem – I measure every grief I meet

22. Earth is a merry damsel, and heaven a knight so true

Poem – Earth is a merry damsel

24. Not with a club, the Heart is broken
Nor with a Stone –
A Whip so small you could not see it
I’ve known

Poem – Not with a club, the heart is broken

26. A Bird, came down the Walk –
He did not know I saw –
He bit an Angle Worm in halves
And ate the fellow, raw

Poem – A Bird, came down the walk

27. Some keep the Sabbath going to church;
I keep it staying at home,
With a bobolink for a chorister,
And an orchard for a dome.

Poem – Some keep the sabbath going to church

28. A word is dead
When it is said,
Some say.
I say it just
Begins to live
That day.

Poem – A word is dead

29. My life closed twice before its close;
It yet remains to see
If Immortality unveil
A third event to me

Poem – My life closed twice before its close

30. That it will never come again is what makes life so sweet.

Poem – That it will never come again

31. Unable are the loved to die, for love is immortality.

Poem – Unable are the loved to die

32. There’s been a death in the opposite house
As laterly as today,
I know it by the numb look
Such houses have alway

Poem – There’s been a death in the opposite house

33. Heaven is what I cannot reach!
The apple on the tree
Provided it do hopeless hang
That “heaven” is to me

Poem – Heaven is what I cannot reach

34. A word is dead when it’s been said, some say. I say it just begins to live that day. But a book is only the heart’s portrait —  every page a pulse.

35. Morning without you is a dwindled dawn.

36. Truth is so rare that it is delightful to tell it.

37. To live is so startling it leaves little time for anything else.

40. It is better to be the hammer than the anvil

Letter to a friend

And that’s your lot for Emily Dickinson quotes, though if you’re after more info we do have a great biography of Emily Dickinson here. What do you think of the quotes – any we’re missing? Let us know in the comments below! 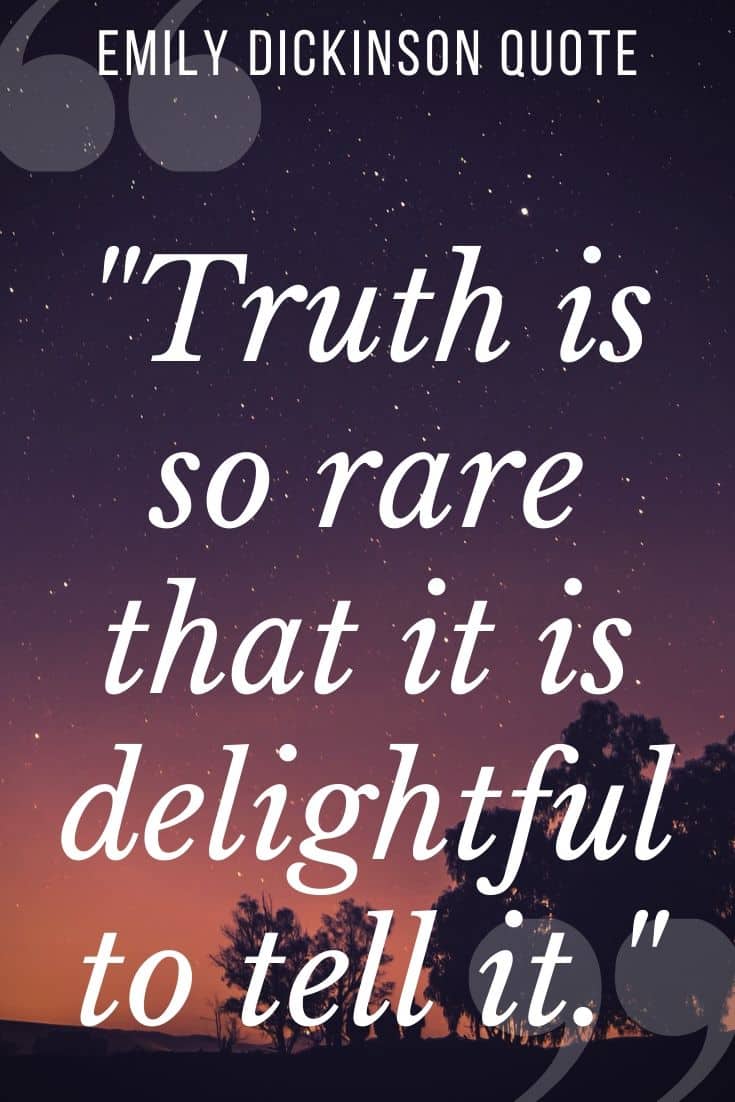