‘The Play’s The Thing’, Meaning & Context

“The play’s the thing” appears to be a part of a soliloquy in William Shakespeare‘s Hamlet. But, it is much more than that. Shakespeare always placed a layer upon another layer to hide the actual meaning beneath the complexity of lateral meanings. He never said anything directly, mostly in his psychologically complex plays like Hamlet, Macbeth, and King Lear. In this play too, there is a depth in the saying, “The play’s the thing”. What did Shakespeare actually intend? It’s “the thing” of our discussion. Here at NoSweatShakespeare, nothing remains unanswered! Be it Hamlet’s psychologically complex soliloquies or Macbeth‘s “vaulting” monologues, we’ve answers even for the most difficult ones.

Before digging deeper with us let’s find where this quote of Shakespeare literally appears.

Context of ‘The play’s the thing’

“The play’s the thing”, the quote by William Shakespeare is not complete. There is another sentence that makes the sense complete and working. It appears in his famous revenge tragedy Hamlet. To be precise, it is one of the well-regarded soliloquies said by Hamlet in the play. In Act 2, Scene 2, when Polonius, the players, Rosencrantz, and Guildenstern exit from the scene, Hamlet begins his soliloquy. At the end of the soliloquy, the last two lines present the quote, “The play’s the thing…” to the audience. It appears in the following manner,

Out of my weakness and my melancholy,
As he is very potent with such spirits,
Abuses me to damn me. I’ll have grounds
More relative than this. The play’s the thing
Wherein I’ll catch the conscience of the king.

So the full quote as it appears in the play Hamlet, is “The play’s the thing/ Wherein I’ll catch the conscience of the king.” Now, it is making some sense. But, what was Hamlet really talking about?

In Hamlet by William Shakespeare, Hamlet is in a dilemma. The ghost of Hamlet’s father which appeared in the play before has placed him into a state of nothingness. He cannot make out what to do or whatnot. That’s why he arranged a drama to be enacted before his uncle Claudius and others. The drama or the play’s plot is written in a manner that can touch the guilty conscience of Claudius. If the ghost is true to Hamlet, Claudius’ reaction will reflect that. In simple words, Hamlet wants to be sure about the murder of his father.

Meaning of ‘The play’s the thing’

“The play’s the thing” by Hamlet, contains different meanings. There is something more that Shakespeare might have intended through this line. However, to understand in the context of Hamlet, it is easy. To make out the overall idea behind it is what brings an interest in this discussion. Let’s dive into the world of meanings…

What did Hamlet really mean by ‘the play’s the thing’?

By this remark, “The play’s the thing”, Hamlet tried to check whether his uncle Claudius actually murdered his father or not. In the play, he thought the ghost might not be his father’s. The ghost seemed to be a manifestation of the devil. Hamlet feared the way, the devil spoke. The devil always deviated men from his pursuit and led him to eternal damnation. Hamlet wanted to skip the trap by verifying the veracity of the “murder most foul”.

As he speaks in Act 2, Scene 2, the idea of arranging a play becomes clear to the audience. His intention is simple. If his uncle had killed his father, he would act according to his guilty conscience after watching the play. He might disclose the truth in front of all. In this way, Hamlet could get his revenge in an easier method. What actually happened in the play, will become clear after reading the play.

You can read the full text of Hamlet here.

What was Shakespeare referring to in ‘the play’s the thing’?

Shakespeare, one of the geniuses of the Renaissance, meant something else. Hamlet, being the mouthpiece of Shakespeare, expressed what his master told him to do. In Shakespeare’s time, a play was sponsored by the king. It was a form of entertainment for both the royal family and in some cases for the normal people. The play Hamlet was also intended for the entertainment of the king, James I. Shakespeare being a dramatist, had a social responsibility to perform. It was his duty to guide and instruct the ruler. But, he couldn’t do that directly. He was the favorite of the king, how could he do that! That’s why he devised a plan.

He said to himself, “The play’s the thing/ Wherein I’ll catch the conscience of the king.” Then he wrote it in the dramatic script of Hamlet. In this way, Shakespeare is pointing towards the social role a dramatist plays. Along with that, there are some other moral issues too. If Shakespeare saw something wrong happening around him, it would be morally painful to just watch. Remaining silent was not a chief characteristic of Shakespeare. Who had a great skill in writing such tremendous plays surviving ages, need to worry about “to be or not to be”? It seems funny, right? It’s Shakespeare!

Modern understanding of ‘The play’s the thing’

“The play’s the thing” by William Shakespeare has been adapted in modern times. Now, “the play” has changed its colors. The inherent meaning, “freedom to act” in one’s own way, gets reflected in the modern films, television series, and web series. A play or any dramatic representation gives the creator the full right to voice his or her opinion. It helps as a mic to speak loud to the world. If the art becomes successful, it will reach the masses easily. Likewise, the opinion of the artist or creator will be heard and understood. When the system blocks the way of an artist, he thrives with his colors or words. Shakespeare had taught us to do that.

In modern times, several political issues or flaws get criticized by the art industry. The intention behind such sharp irony and piercing satire, has not always a bad connotation. Somehow, the artist might have meant to instruct the system. It is also possible that the artist is also the victim of a flaw in the system. If his plea is not heard directly, “the play’s thing” for him. In this way, a modern artist tries to “catch the conscience of the king.” (irony intended!)

The reappearance of ‘the play’s the thing’ in modern times

“The play’s the thing”, the quote has been used in many contexts since Shakespeare coined it. Here are a few examples in which the quote is used in modern times:

Witcher 3 “The Play’s the Thing”

“The Play’s the Thing” is an important quest in The Witcher 3: Wild Hunt. It is an action-based role-playing game released in 2015. This game is very famous for its innovative theme based quests.

“The Play’s the Thing” SpongeBob

Grief is the Thing With Feathers

The syntax of “The play’s the thing” by Shakespeare is adapted in the title of the play, “Grief is the Thing With Feathers”. It is written by Enda Walsh and first performed on 16 March 2018.

The Real Thing by Tom Stoppard

‘The Real Thing’ by Tom Stoppard is a play focusing on the famous Shakespearean theme of “reality versus appearance”. It also uses “the play’s the thing” syntax to suit its title. It was first performed in 1982.

The Thing About December

‘The Thing About December’ is a stage adaptation of Donal Ryan’s novel having a similar name. The novel of Ryan presents a theme of the struggle of a young man. It is similar to the theme of William Shakespeare’s Hamlet.

Frequently asked questions about ‘the play’s the thing’

What does ‘the play’s the thing’ mean?

“The play’s the thing” appears in Shakespeare’s Hamlet. It means that Hamlet is using the play as an instrument to touch the conscience of Claudius. He wants to make him aware of the fact that he knows who actually killed his father. 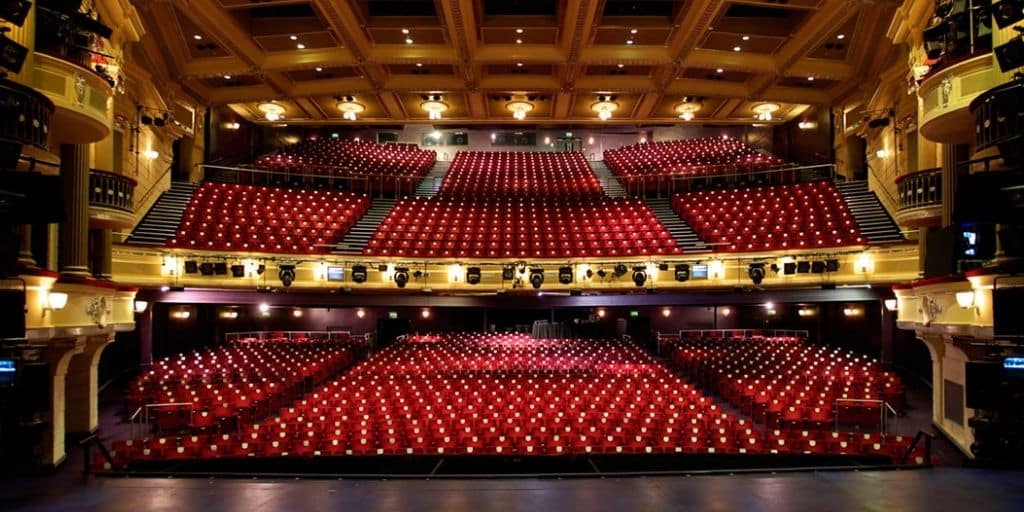 ‘The play’s the thing’ at this empty theatre auditorium