Origin of “Skin and Bones”

This is one of those well-known, well-used quotations that do not appear anywhere in Shakespeare but that come, in fact, from the Bible. It appears in the Old Testament Book of Job, Chapter 19:7-21:

“My breath is offensive to my wife; I am loathsome to my own family. Even the little boys scorn me; when I appear, they ridicule me. All my intimate friends detest me; those I love have turned against me. I am nothing but skin and bones; I have escaped only by the skin of my teeth. Have pity on me, my friends, have pity, for the hand of God has struck me.” 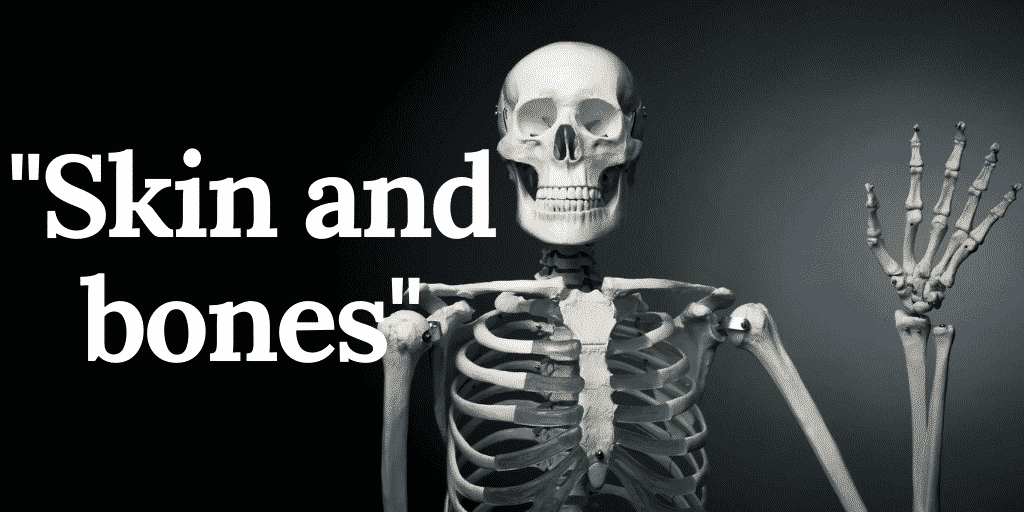 The biblical “skin and bones”

Context of “Skin and Bones”

As the text has it, “Job was righteous and godly, blameless and upright, a man who feared God and shunned evil. He was not only righteous, but also wealthy. Here was a man whose every need was met and every desire was fulfilled.

His fame is due to the test of his faith God gave him. It came as a kind of bet between God and Satan.

One day God and Satan are chatting. Satan, always ready to undermine God, remarks: “Does Job fear God for nothing? Have you not put a hedge around him and his household and everything he has? You have blessed the work of his hands, so that his flocks and herds are spread throughout the land.”

Having singled out someone who has been extremely blessed and favoured by God, Satan implies that Job is only honouring God because God has been so good to him. “ But now stretch out your hand and strike everything he has, and he will surely curse you to your face,” he says.

That was the challenge. God took it up. He gave  Satan permission to put Job to the test. “Very well, then.” He says. “Everything he has is in your power,” and he warns Satan “ On the man himself do not lay a finger.”

Job then experienced ultimate human suffering at the hand of Satan but all watched by God. This is what Job endured:

Discussing it with his friends did not help. Clearly, Job needed to talk it out with God Himself.  He did not for a moment curse God, nor utter a word against Him. . “I desire to speak to the Almighty and to argue my case with God,” he told his friends.

Eventually God grants him a conversation. God reminds him of His deity and authority, of His eternality and power over creation, of His wisdom and omnipresence, of His understanding and supremacy. Job agrees: “I know that you can do all things, and that no purpose of yours can be thwarted.” He does not utter a single word of criticism, in spite of having lost everything and being in a seriously bad state of health.

Having won the bet with Satan God restores Job’s fortunes and gives him twice as much as he had before. “And Job died, an old man, and full of days” (Job 42:17)

Quotations from the Bible that are often attributed to Shakespeare

‘He kept him as the apple of his eye’

‘Put a knife to thy throat, if thou be a man given to appetite.’

‘Let us eat and drink; for tomorrow we shall die.’

‘Till death do us part.’

The Common Book of Prayer

‘I am escaped with the skin of my teeth.’

‘The love of money is the root of all evil.’

‘They do not practice what they preach.’