‘No Man Is An Island’, Meaning & Context

People usually think that the phrase ‘No man is an island’ comes from Shakespeare, as it sounds like it is one of Shakespeare’s many famous lines. It also sounds as though it may have come from the Bible. There are hundreds of quotations similarly mistaken as Shakespeare’s, such as “Hell hath no fury like a woman scorned,” that comes from a Restoration play, The Mourning Bride by William Congreve

‘No man is an island’ is an idiom taken from a 17th century sermon by the Dean of St Paul’s Cathedral. The Dean happened to be John Donne, a clergyman who now, almost four hundred years later, is regarded as one of the greatest English poets.

It is often assumed that ‘no man is an island’ is from one of Donne’s poems: it’s ironic that though he is the author of some of the finest and most memorable verses in English poetry, this phrase, not from a poem, but a sermon, is the most famous quote from him.

Here is the full John Done quote from his sermon:

“No man is an island entire of itself; every man is a piece of the continent, a part of the main; if a clod be washed away by the sea, Europe is the less, as well as if a promontory were, as well as any manner of thy friends or of thine own were; any man’s death diminishes me, because I am involved in mankind. And therefore never send to know for whom the bell tolls; it tolls for thee.” 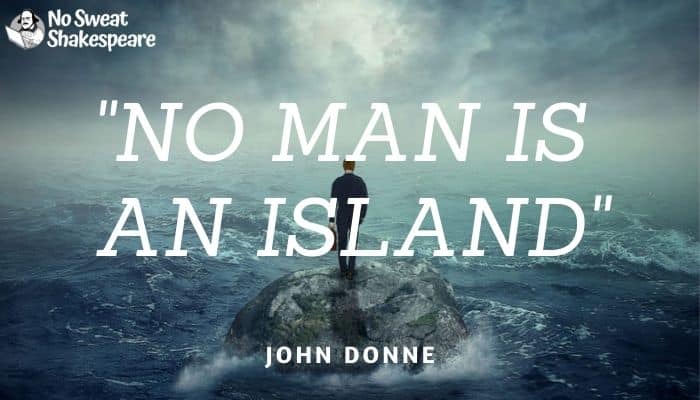 No man is an island

Background to John Donne’s ‘No man is an island’ sermon

The words ‘No man is an island’ were embedded in a deeply Christian sermon about how human beings are connected to each other, and how important that connection is for the wellbeing and survival of any individual. When you hear the church bell tolling for someone who has died, don’t ask who it is, Donne says, just know that it’s tolling for you too because you are part of the same society and the death of anyone takes a part of your own life away.

The sermon is noted, not just for ‘no man is an island,’ but also the phrase ‘for whom the bell tolls,’ which was used by Ernest Hemingway as the title of his most famous novel.

John Donne and the development of English poetry

As Shakespeare was nearing the end of his playwriting career there was a new poetry taking hold in English. It was written by poets who were not professional writers but highly educated men who had careers in other areas like the Church, business, diplomacy, and the military.

Their poetry reflected their education and they used the latest developments in science, geography, astronomy, etc. to make their imagery: their poems had a strong intellectual component. Shakespeare himself, never for a moment one of the many poets who became old-fashioned in the face of the new poetry, became a part of this poetic development, which we now call ‘metaphysical poetry’ and the poets “the metaphysical poets,”. In fact, some of Shakespeare’s verse in his poems and plays were models for the metaphysical poets.

The metaphysical poets did not regard their poetry writing as meaning that they were “poets” in the sense that men like John Milton and Edmund Spencer were – they were busy men in their own fields who wrote poems more as a hobby, not publishing them but passing them around to friends who also wrote poems. In that way, they influenced each other. Looking at their poems now there are striking similarities, which amounts to their being a ‘school’ of poetry – ‘the metaphysical poets.’

When we look back now at the metaphysical poets John Donne is, without doubt, the best of them. His poems are powerful and beautiful, mainly about love, but becoming some of the most powerful religious poems like his sonnets ‘Batter my heart three person’d God,’ ‘At the round earth’s imagined corners blow your trumpets angels’ and ‘Death be not proud, though some have called you mighty and dreadful’.

That development from love to religious poetry reflects Donne’s career and personal development. He trained as a lawyer then embarked on a life of adventure as a soldier and explorer, becoming well known as a man about town, popular with women. He settled down at the age of 25 as a high-level secretary, where he fell in love with his wealthy employer’s niece Anne More. He married her secretly, which enraged her uncle: the couple had to disappear. Donne wrote a small verse to describe their plight: “John Donne, Anne Donne, Undone.”

The pair went to London where Donne eked out a meager living until he was elected to parliament in 1602. In the 16 years of their marriage, Anne gave birth to 12 children, dying during the birth of the twelfth.

After several years as a member of parliament, Donne converted from Catholicism to Anglicanism, took holy orders, and entered the church, eventually becoming the Dean of St Pauls, where he wrote and delivered a great number of wonderful sermons.

His sermons, as powerful as his poems, are full of lines and ideas that indicate an intense life, profound thoughts, and a strong sense of humour. Some other famous lines from his sermons are:

“When one man dies, one chapter is not torn out of the book, but translated into a better language”

“And who understands? Not me, because if I did I would forgive it all.”

“Death is an ascension to a better library”

“Reason is our soul’s left hand, faith her right. By these we reach divinity”

“He that hath all can have no more.”

Of all of John Donne’s quotes – from his sermons and poetry, “No man is an island” stands apart as the most perfect expression of an individual’s position in relation to society.