“Fair play” is a short phrase that Shakespeare was very fond of as he used it three times in his plays.

When we use the phrase today it’s in the context of human behaviour – the fair and honest treatment of people, or in sport – playing in accordance with the rules, not cheating or having an unfair advantage.

Those two little words mean a lot of things and Shakespeare exploits that flexibility.

And so, although the phrase is only two words long Shakespeare uses it differently each time he includes it. In each case he makes subtle little puns on human beings’ capacity to exalt clever dishonesty and foolish virtue. The most famous example of its use is in The Tempest (V:1):

Miranda: “Sweet lord, you play me false.”
Ferdinand: “No, my dear’st love,
I would not for the world.”
Miranda: “Yes, for a score of kingdoms you should wrangle,
And I would call it, fair play.”

This comes at the end of the play. The marriage of Miranda and Ferdinand is a fair resolution to the play’s problems and is a healing of the breach between the two fathers. At the same time, however, ‘fair’ can also be a ‘foul’ and we are reminded of the ‘fair is foul and foul is fair’ of Macbeth. Ferdinand being fair to himself means ‘speaking false’ to his new bride-to-be.

Philip the Bastard: “According to the fair play of the world,
Let me have audience; I am sent to speak:
My holy lord of Milan, from the king
I come, to learn how you have dealt for him.”

Philip’s offer to the French is an elegant, bloodless peace rather than war. However, as usual with Shakespeare, it’s not that simple. Philip’s delaying his attack to propose a ‘fair’ peace leads to a general massacre on both sides, because an enemy interprets his offer as weakness.

In Troilus and Cressida (V:3)

Troilus: “Brother, you have a vice of mercy in you,
Which better fits a lion than a man.”
Hector: “What vice is that, good Troilus? chide me for it.”
Troilus: “When many times the captive Grecian falls,
Even in the fan and wind of your fair sword,
You bid them rise, and live.”
Hector: “O,’tis fair play.”
Troilus: “Fool’s play, by heaven, Hector.”
Hector: “How now! how now!”

Troilus complains that, in the Trojan War to save their homeland, ‘fair play’ to their foemen is ‘fool’s play’. This also comes at the end of the play where things are about to be wrapped up. Troilus and Hector are about to face the sort of ‘fair’ divine justice that destroys Troy for Helen’s abduction from her Greek husband. 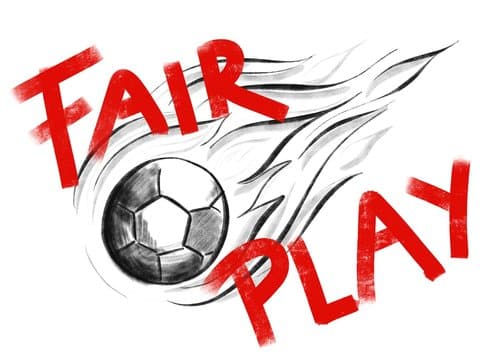 Fair play in the context of sport

In our time ‘fair play’ is most often used with reference to sports events. Fair play is the driving principle: all participants acknowledge that winning or advantage isn’t everything and that there are rules and standards of behaviour they should follow at all times. It means respect for opponents, declining to exploit their weaknesses unfairly, and maintaining a positive attitude to opponents and the game itself – win or lose.

The phrase “fair play” has migrated from its sport context to become a metaphor for general behaviour as regards other people.