As the most quoted English writer, Shakespeare created more than his fair share of famous quotes.  We often talk about Shakespeare’s quotes as things the wise Bard is saying to us, but we should remember that some of his wisest words are spoken by his biggest fools. For example, both ‘neither a borrower nor a lender be,’ and ‘to thine own self be true’ are from the foolish, garrulous and quite disreputable Polonius in Hamlet.

50 Of Shakespeare’s Most Famous Quotes

2. ‘All the world’s a stage, and all the men and women merely players. They have their exits and their entrances; And one man in his time plays many parts.’

4. ‘Now is the winter of our discontent’

5. ‘Is this a dagger which I see before me, the handle toward my hand?’

6. ‘The lady doth protest too much, methinks‘

11. ‘The better part of valor is discretion‘

13. ‘Friends, Romans, countrymen, lend me your ears: I come to bury Caesar, not to praise him.’

16. ‘There are more things in heaven and earth, Horatio, than are dreamt of in your philosophy.’

17. ‘Love looks not with the eyes, but with the mind; and therefore is winged Cupid painted blind.’

18. ‘Shall I compare thee to a summer’s day? Thou art more lovely and more temperate.’

19. ‘Uneasy lies the head that wears the crown.‘

21. ‘This royal throne of kings, this sceptred isle… This blessed plot, this earth, this realm, this England.’

22. ‘What light through yonder window breaks.’

23. ‘Some are born great, some achieve greatness, and some have greatness thrust upon them.’

24. ‘Cowards die many times before their deaths; the valiant never taste of death but once.’

25. ‘Full fathom five thy father lies, of his bones are coral made. Those are pearls that were his eyes. Nothing of him that doth fade, but doth suffer a sea-change into something rich and strange.’

27. ‘How sharper than a serpent’s tooth it is to have a thankless child!’

31. ‘We are such stuff as dreams are made on, and our little life is rounded with a sleep.’

32. ‘Life’s but a walking shadow, a poor player, that struts and frets his hour upon the stage, and then is heard no more; it is a tale told by an idiot, full of sound and fury, signifying nothing.’

33. ‘To thine own self be true, and it must follow, as the night the day, thou canst not then be false to any man.’

35. ‘There is nothing either good or bad, but thinking makes it so.’

37. ‘The course of true love never did run smooth.’

39. ‘The fault, dear Brutus, lies not within the stars, but in ourselves, that we are underlings.’

40. ‘Let me not to the marriage of true minds admit impediments.’

41. ‘The evil that men do lives after them; The good is oft interrèd with their bones.’

43. ‘Neither a borrower nor a lender be; for loan oft loses both itself and friend, and borrowing dulls the edge of husbandry.’

47. ‘This is very midsummer madness.’

48. ‘Some Cupid kills with arrows, some with traps.’

What do you think – any famous Shakespeare quotes missing from the above list? As per his own words, Shakespeare may not have been born great, but he certainly managed to achieve greatness! Let us know your favourite William Shakespeare quotes in the comments section below.

Watch students from the 2012 Shakespeare School work their way through 38 famous Shakespeare quotes in two minutes… How many of them do you know? 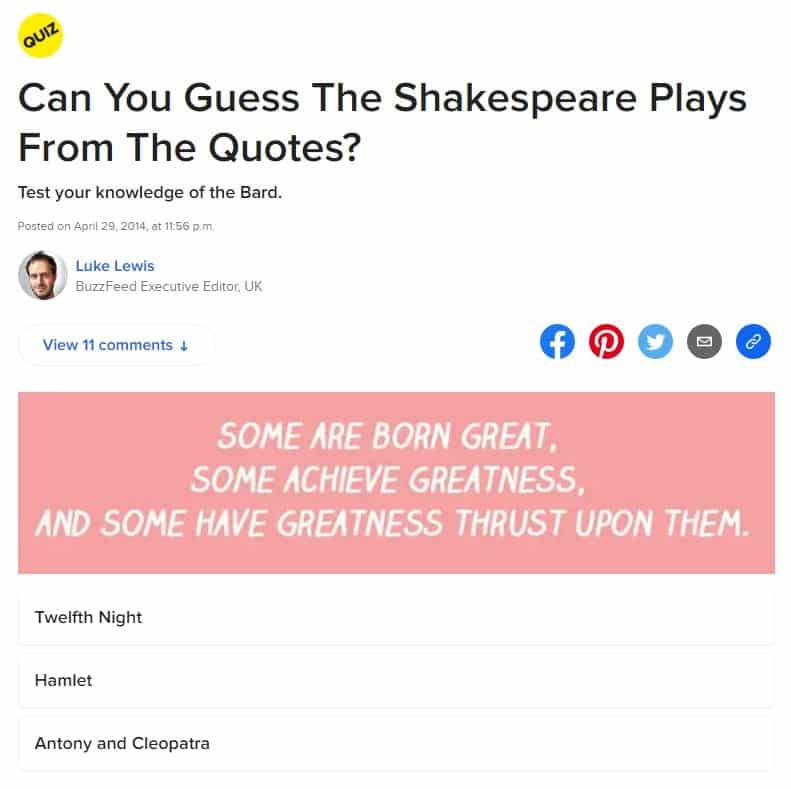 Any ideas on how to use Shakespeare quotes in your essays? Need Shakespeare writing help? A team of professional essay writers from WriteMyPaperHub will write your paper for you.