‘To Thine Own Self Be True’, Meaning & Context

‘To thine own self be true’ is a line from act 1 scene 3 of Shakespeare’s play, Hamlet. It is spoken by King Claudius’ chief minister, Polonius as part of a speech where he is giving his son, Laertes, his blessing and advice on how to behave whilst at university.

It is a speech that contains a number of different well known Shakespeare quotes, such as ‘Give every man thy ear but few thy voice,’ ‘Neither a borrower nor a lender be,’ and ‘The apparel oft proclaims the man’ fill the speech. Polonius’ advice is summed up with the lines: ‘This above all: to thine own self be true, And it must follow, as the night the day, Thou canst not then be false to any man.’

Here is the full text of Polonius’ speech:

There, my blessing with thee.
And these few precepts in thy memory
Look thou character. Give thy thoughts no tongue,
Nor any unproportioned thought his act.
Be thou familiar but by no means vulgar.
Those friends thou hast, and their adoption tried,
Grapple them unto thy soul with hoops of steel,
But do not dull thy palm with entertainment
Of each new-hatched, unfledged comrade. Beware
Of entrance to a quarrel, but being in,
Bear ’t that th’ opposèd may beware of thee.
Give every man thy ear but few thy voice.
Take each man’s censure but reserve thy judgment.
Costly thy habit as thy purse can buy,
But not expressed in fancy—rich, not gaudy,
For the apparel oft proclaims the man,
And they in France of the best rank and station
Are of a most select and generous chief in that.
Neither a borrower nor a lender be,
For loan oft loses both itself and friend,
And borrowing dulls the edge of husbandry.
This above all: to thine own self be true,
And it must follow, as the night the day,
Thou canst not then be false to any man.
Farewell. My blessing season this in thee.

The lessons in Polonius’ ‘To thine own self be true’ speech are generally thought of as good advice, which is why parts of it are so often quoted. After all, what could be more sound than advice which counsels one to be careful before speaking out? Or if you avoid lending or borrowing money you are more likely to keep your friends. And, of course, being true to oneself is a noble aspiration.

Aside from the content of the speech, what makes these words so interesting is the fact that they come from Polonius. In the first place, Polonius is a bore, and all of the wonderful advice is probably not even being heard by his children as they know how he goes on about everything. In the staging of Hamlet the other actors on stage with Polonius – his son, Laertes and daughter, Ophelia – often stand behind him and make mocking gestures as he speaks the words.

As well as being a bore, Polonius is an unpleasant piece of work. Immediately after making this speech, he sends someone to Paris to spy on Laertes as he enjoys his student life. Polonius also spies on his daughter, sets her up for entrapment, interferes with her romantic life, and ultimately contributes to her suicide.

Polonius meets a sticky end while spying on Hamlet in a confidential conversation with his mother. Hamlet hears someone hiding behind a curtain and stabs whoever it is. That turns out to be Polonius.

Coming from Polonius, this advice to be true to oneself is pompous, hypocritical, and empty. It is a tribute to Shakespeare that he can produce a speech that is quoted for four hundred years as definitive wisdom about human behaviour although it comes from a character who is a disreputable and hypocritical empty vessel.

The phrase has evolved, and in recent years ‘being true to yourself’ has become a common, fashionable term. It’s used to mean not worrying about pleasing other people, or living by someone else’s rules or standards, but rather living as your natural self, without compromise. 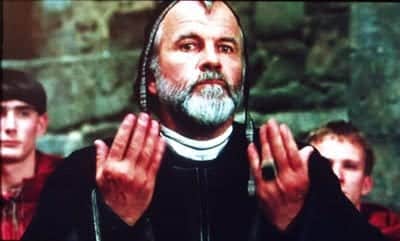 Ian Holm as Polonius, delivering his ‘to thine own self be true’ speech